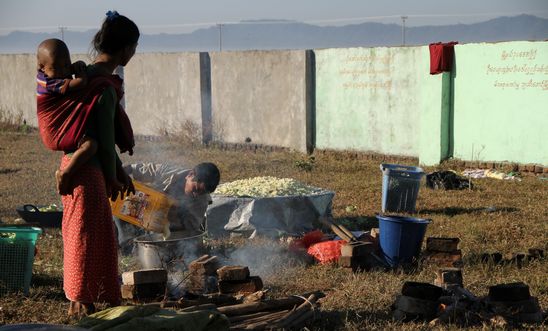 More than 30,000 people have been displaced in the latest violence. © RICHARD SARGENT/AFP/Getty Images

The Myanmar military has committed fresh war crimes and other human rights violations in Rakhine State, according to evidence published by Amnesty International today.

In a new report, ‘No one can protect us’: War crimes and abuses in Myanmar’s Rakhine State, Amnesty shows how the Myanmar military have repeatedly killed and injured civilians in indiscriminate attacks since January this year.

Military forces have carried out extrajudicial executions, arbitrary arrests, torture and other ill-treatment, as well as enforced disappearances. The military operation is ongoing, raising the prospect of additional crimes being committed.

Amnesty’s 46-page report examines the period of intense military operations that followed coordinated attacks on police posts by the Arakan Army, an ethnic Rakhine armed group, on 4 January this year. The new operation followed a government instruction to ‘crush’ the Arakan Army.

“Less than two years since world outrage over the mass atrocities committed against the Rohingya population, the Myanmar military is again committing horrific abuses against ethnic groups in Rakhine State.

“The new operations in Rakhine State show an unrepentant, unreformed and unaccountable military terrorising civilians and committing widespread violations as a deliberate tactic.

“Authorities are compounding the misery of civilians by blocking the supply of medicine, food and humanitarian relief to those in need, including children.

“Civilians in Rakhine State are paying the heaviest price from the military’s assaults and their aftermath – yet the government continues to choose to remain silent about this spiralling crisis.”

Amnesty’s report uncovers evidence of abuses committed by Myanmar troops implicated in past atrocities, including specific divisions and battalions under the Western Command. Amnesty has further confirmed that newly-deployed units from the 22nd and 55th Light Infantry Divisions are responsible for many fresh violations.

From interviews and other evidence, including satellite imagery, Amnesty documented seven unlawful attacks which killed 14 civilians and injured at least 29 more. Most of these attacks were indiscriminate, and some may have been direct attacks on civilians. In one incident in late January, a seven-year-old ethnic Rakhine boy died after a mortar almost certainly fired by the Myanmar military exploded in Tha Mee Hla village in Rathedaung Township, during fighting between the military and the Arakan Army. Although the boy was severely injured, it took several hours before Myanmar soldiers gave his family permission to take him to a hospital. He died the following day.

He said: “I heard an explosion. It was very loud and there was a big fireball that fell around us… I grabbed my daughter in my arms… [when] we looked back half of our house’s roof was gone.”

Amnesty reviewed satellite imagery which confirmed the destruction of a building in Ywar Haung Taw village, as well as the presence of new artillery at the police base close by.

While ethnic Rakhine communities have borne the brunt of violations committed by the Myanmar military recently, other communities, including the Rohingya, have also suffered.

On 3 April, a military helicopter opened fire on Rohingya labourers cutting bamboo, killing at least six men and boys and injuring at least 13 others.

One survivor told Amnesty: “The helicopter came from behind the mountain. Within minutes it fired rockets. I was running for my life thinking about my family and how I would survive.”

Amnesty further documented seven cases of arbitrary arrest in Rakhine State since January. These arrests were exclusively of men, usually ethnic Rakhine men of fighting age, and were often accompanied by torture and other ill-treatment aimed at obtaining information about the Arakan Army.

One 33-year-old ethnic Rakhine man said: “[The soldier] asked, ‘Where do the Arakan Army keep their weapons?’ I replied ‘I don’t know, I’m not Arakan Army’… I remember a punch and a kick, then they hit my head with a rifle… I tried to cover my head with my hands but they started kicking and beating [me]. There was blood on my hands, face and head.”

Amnesty documented the enforced disappearance of six men – one ethnic Mro and five ethnic Rakhine – in mid-February. A witness said she last saw one of the men in military custody. Since then, families have had no information about their loved ones’ fate and whereabouts.

More than 30,000 people have been displaced in this latest violence. However, the Myanmar authorities have blocked humanitarian access to the affected areas.

While ethnic Rakhine communities have long fostered political grievances against Myanmar’s central government, the Arakan Army is led by a younger generation of ethnic Rakhine nationalists. Currently, the Arakan Army is estimated to have a fighting force of up to 7,000 troops. Established in 2009, it has fought alongside other ethnic armed organisations in northern Myanmar and in recent years has clashed sporadically with the military in Rakhine and in the neighbouring Chin State.

While the Myanmar military was responsible for the overwhelming majority of violations documented by Amnesty, the Arakan Army has also committed abuses against civilians, including abductions. The Arakan Army has also threatened and intimidated village administrators and local businesspeople, warning them in letters against interfering with the group’s activities. The letters were each accompanied by a bullet and bore the Arakan Army’s official seal.

The latest military operation in Rakhine State was launched less than 18 months after the Myanmar security forces perpetrated crimes against humanity against the Rohingya population. More than 900,000 Rohingya refugees are still living in camps in neighbouring Bangladesh, and Amnesty’s new report provides yet more evidence that it is not safe for them to return.

This fresh evidence lends even greater urgency for the UN to act on the full range of crimes committed by the Myanmar military in Rakhine State, and in northern Myanmar’s Kachin and Shan States. A UN Fact-Finding Mission has called for senior military officials to be investigated and tried for crimes against humanity, war crimes and genocide.

In the absence of any domestic accountability, Amnesty is calling on the UN Security Council to urgently refer the situation in Myanmar to the International Criminal Court and impose a comprehensive arms embargo. Myanmar’s international partners must also rethink their relations with the Myanmar military leadership and implement targeted sanctions against senior officials through multilateral bodies like the European Union and the Association of South East Asian Nations.

“With Myanmar’s military committing atrocities as brazenly as ever, it’s clear international pressure needs to intensify.

“Again and again, the international community has failed to stop the Myanmar military’s crimes and protect the civilian population. The Security Council was established to respond to exactly these kinds of situations, it’s time it took its responsibility seriously.”

In March, Amnesty conducted a total of 81 interviews, including 54 interviews in Rakhine State and 27 other interviews with people living in conflict-affected areas. They included ethnic Rakhine, Mro, Rohingya and Khami villagers, belonging to the Buddhist, Christian and Muslim faiths. Amnesty also reviewed photographs, videos and satellite imagery, and interviewed humanitarian officials, human rights activists and other experts.