Mosul, Iraq: injured and traumatised children caught up in a gathering 'humanitarian crisis' 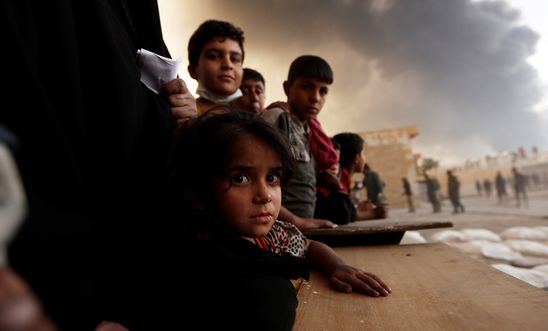 Countless children have already been displaced by the fighting in and around Mosul © Reuters
Badly injured and traumatised children self-harming and bed-wetting
Yazidi children with harrowing tales of rape and beheadings in ISIS captivity
‘You grab the guy by the hair to pull his head up so you can cut his throat’ - 13-year-old Jordo, taught how to behead by ISIS
The desperate plight of a generation of children is in the balance as the bloody battle for the city of Mosul threatens to become a humanitarian catastrophe, Amnesty International said today following a recent investigation.
On a visit to the region this month, Amnesty met children of all ages who’d suffered terrible physical and psychological injuries after being caught in the line of fire between the Islamic State armed group and US-coalition-backed Iraqi government forces.
Countless children have been left scarred and deeply traumatised by the extreme violence they have experienced and witnessed. In a hospital in Erbil, capital of the semi-autonomous Kurdistan Regional Government, Amnesty spoke to Umm Ashraf, who described how she and her seven children were injured when a car bomb exploded outside the house where they were sheltering in east Mosul on 13 December, burying scores of people under the rubble of several houses destroyed in the blast. Her eldest daughter, 17-year-old Shahad, lost both her eyes in the attack.

“Our homes have become our children’s graves. My neighbours are still buried under the rubble; no one has been able to dig them out. I dragged my wounded children from under the rubble one by one. But my sister was killed, I could not help her. My neighbour was decapitated in the blast, so many others killed.

“My children saw my sister being killed in front of them; they saw our neighbour who was decapitated in the strike; they saw body parts on the ground. How can they ever recover from that?”

In another case, eight-year-old Teiba and her 14-month-old sister Taghreed were killed and their parents seriously injured when a mortar landed by the courtyard of their home in east Mosul on 12 November. The children’s mother, Mouna, told Amnesty:

“I was telling the girls to go inside. There was shelling and shooting 24 hours a day in our area. Just then a mortar landed by the house. I collapsed on the spot, my daughter Teiba fell with her head against the gate, and the little one crawled and crawled till she reached me and collapsed on my lap.”

Out of the thousands of children who’ve been exposed to sustained violence, only a fraction have access to the psychological care and support. With few or no functioning or accessible hospitals left in the conflict-affected areas of east Mosul, the epicentre of the fighting, the best hope for the wounded to receive medical care is in Erbil, some 50 miles away. However, getting to Erbil is almost impossible for residents of Mosul, with only the few managing to obtain a special permit to enter the area. Consequently, some families fleeing fighting have been forced to wait for days in unsafe no-man’s-land areas.
Among those who did reach Erbil is two-year-old Ali, who was injured in a strike in the Hay al-Falah neighbourhood of Mosul on 14 December. When Amnesty met him he was barely breathing, his face an unrecognisable bloody mess of torn flesh. The doctors told his grandmother, Dokha, that they weren’t sure if he would survive. Dokha has already lost two granddaughters, 14-year-old Zaira and 16-year-old Wad’ha, who were killed in the same strike, and she was beside herself with grief at the thought of losing Ali too. She said:

“Please God protect him, don’t take him from me. My grandchildren had fled their home and had been staying in a neighbour’s basement for the past 30 days. They had run out of food and water completely. The area was recaptured by the army two days earlier so they thought it was safe to go out, but they were bombed as they reached the gate of the courtyard.”

And even though only some of those injured in the Mosul battle have been evacuated to Erbil, hospitals there have been overwhelmed by the large number of casualties. Meanwhile, the rising costs of basic necessities, as well as the lack of food, fuel, medicines and clean water inside Mosul have left children at extreme risk of malnutrition, dehydration and water-borne and other diseases.
Donor governments committed in September to ensure “access to lifesaving assistance” and to “facilitate the rapid, unimpeded passage of impartial humanitarian relief”. Amnesty is emphasising the imperative nature of ensuring the protection and care of children affected by the armed conflict in the humanitarian response.
Donatella Rovera, Amnesty International’s Senior Crisis Response Adviser, who has recently returned from a 17-day research trip to northern Iraq, said:

“Children caught in the crossfire of the brutal battle for Mosul have seen things that no one, of any age, should ever see.
“I met children who have not only sustained horrific wounds but have also seen their relatives and neighbours decapitated in mortar strikes, torn to shreds by car bombs or mine explosions, or crushed under the rubble of their homes.
“Despite Iraqi and coalition forces’ assurances that they are doing their utmost to protect civilians, every day children are dying or being injured - in their homes or as they risk their lives to flee to safety.
“Without more efforts by the Iraqi authorities and their allies to create safe avenues for civilians to get out of conflict-affected areas of the city and to provide essential services to residents trapped under fire inside Mosul, a humanitarian catastrophe could unfold.”

Humanitarian workers told Amnesty that children displaced from the Mosul battle and other areas affected by the conflict show clear signs of trauma such as excessive crying, mutism and violent behavior, and have difficulty leaving their parents’ or carers’ sides. However, seemingly due to a lack of resources, these children aren’t receiving adequate mental health care to help them cope with trauma and begin to restore a sense of normality to their lives.

At a camp for internally-displaced people, four-year-old Mohammed rocks to and fro, slaps himself and bangs his head on the floor. He cries inconsolably every time he soils himself, which happens several times a day.  His mother, Mouna, says he has been behaving like this since the mortar strike on 12 November which killed two of his sisters. Mouna, who is herself immobilised by a fractured leg and has not been able to get up from a thin mattress on the floor since she arrived in the camp, said:

“He and his little sister Taghreed were inseparable. He used to carry her all the time. Now he does not understand that his sisters are dead. He thinks we left them behind and gets sad and angry. I think he needs psychotherapy but there is nothing here in the camp.”

The family’s two surviving daughters, aged ten and 12, have to look after the family, getting water, cooking, washing clothes and dressing their injured parents’ wounds. They have no time to play or study.
Since their arrival at the IDP camp, the children have received no psychological support to help them deal with the trauma of seeing their siblings killed in front of them. While the humanitarian response has provided limited psychosocial support activities in some IDP camps, they are woefully inadequate to deal with the sheer number of children who’ve been affected by the conflict and in many cases are direct victims of violence.

Yazidi children taught how to behead by ISIS

Meanwhile, Yazidi children returning from ISIS captivity have endured unspeakable suffering. Girls as young as 11 have been raped, while boys have been forced to undergo military training, taught how to decapitate people, and made to watch executions. Jordo, a 13-year-old boy who spent two years in ISIS captivity, gave a chilling account of what he learned:

AK, ten, returned from ISIS captivity in November, more than two years after being abducted along with his parents and seven siblings. Only two of them, aged six and seven, have returned - the rest of the family remain in ISIS hands. The children are being cared for by two distant cousins who are already providing for 23 other women and children. One told Amnesty about the difficulties of coping with the erratic behaviour of the traumatised children:

“AK is very difficult to control. He breaks and sets things on fire, and the other day he went out in the cold in his underwear and got sick. All three of them wet themselves all the time, so we make them sleep in a separate tent because of the smell. These children are very traumatised and need professional help, but we have found no help so far.”