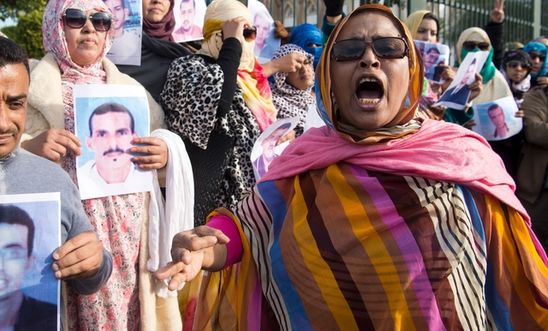 The Moroccan judicial authorities should ensure that upcoming verdicts in the trial of 24 Sahrawi activists are not based on confessions or statements implicating other defendants obtained under torture during police interrogations, Amnesty International and Human Rights Watch said today.

The Rabat Court of Appeals is expected to issue a verdict in the case tomorrow in a long-running case relating to fatal clashes that occurred during the Moroccan police’s dismantling of the Sahrawi “Gdeim Izik” protest camp on 8 November 2010, and in nearby El Ayoun, the main city of Western Sahara.

The defendants are being tried on charges of forming a “criminal gang” and participating, or complicity, in violence against security forces “leading to death with intent,” among other charges.

All the Gdeim Izik group were originally convicted in a military trial, but Morocco’s Court of Cassation ordered new civilian proceedings following the introduction of a law banning military trials of civilians. In the previous trial, a Rabat military court convicted all the defendants almost exclusively on the basis of their confessions allegedly obtained under torture. Most of the defendants received long sentences and have already served more than six years in prison.

In the new trial before the Rabat Court of Appeals which began late last year, the court agreed to have court-accredited doctors perform medical examinations on 21 defendants to assess their torture allegations. The doctors examined the men in February and March this year, almost seven years after the alleged torture took place. The doctors’ reports, which Human Rights Watch and Amnesty have reviewed, note the types of torture and other mistreatment that each of the defendants says he underwent during arrest and interrogation in 2010.

Their allegations include severe beatings, sometimes while suspended by the wrists and knees, sexual assault including rape with an object, and pulling out of fingernails and toenails. The new doctors’ medical reports all conclude with the same phrase or a variation of it: “The symptoms that he manifests at present and what we noted during our examination are not specific to the specific methods of torture alleged.”

“The court should exclude these confessions and statements unless they are able to make a persuasive case that they were made voluntarily. No defendant should be penalised because their allegations of torture went uninvestigated for years.”

“Morocco took the positive step of ordering new proceedings before a civilian court, but it still needs to ensure no-one is convicted on the basis of evidence obtained by torture. The bereaved families want to see justice done, but justice would be ill-served by relying on evidence obtained through the use of torture or coercion.”

Moroccan courts have a record of relying on confessions allegedly obtained under torture or coercion as the main source of evidence for their verdicts against defendants.

The UN Committee Against Torture concluded last November that Morocco had breached the UN Convention Against Torture with regard to one of the defendants, Naâma Asfari, on several counts. Responding to a complaint filed by Asfari, represented by the Action by Christians for the Abolition of Torture (ACAT-France), the committee found that the authorities had failed to investigate his allegations of torture and other ill-treatment, to protect him and his lawyer from reprisals, and had denied him reparations including medical rehabilitation and compensation. It also said the military court had relied on a statement extracted through torture or other ill-treatment to convict him.

In the current trial, the relatives of the security agents killed during the disturbance are represented as civil parties to the case, although the court has yet to rule on whether they can be part of the proceedings as they were not parties to the earlier case.