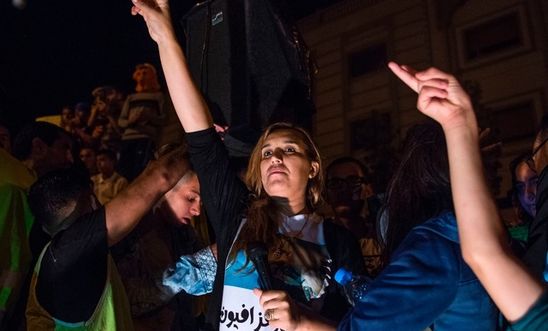 The Moroccan authorities must overturn the conviction of Nawal Benaissa, a peaceful protester from the ‘Hirak’ movement, who has been repeatedly intimidated and harassed simply for standing up for the rights of people in Morocco's northern Rif region, Amnesty International said ahead of her appeal hearing tomorrow (Thursday 18 October).

Nawal Benaissa became one of the most prominent spokespeople for the Hirak protest movement after the arrest of its leader Nasser Zefzafi in May 2017. Benaissa was prosecuted over comments she posted on Facebook between June and August 2017, in which she called on residents of Al Hoceima province to join protests and criticised the security forces’ excessive use of force against demonstrators.

Benaissa was arrested four times between June and September 2017 and has been repeatedly intimidated and harassed by the authorities ever since. While she was detained, the authorities forced her to shut down her Facebook account, which had more than 80,000 followers.

On 15 February this year, Benaissa was sentenced to a ten-month suspended prison term and a fine of 500 dirhams (around £40) on charges of "protesting in an undeclared demonstration", "insulting law enforcement officers” and “incitement to commit” criminal offences.  Her court appeal will take place tomorrow.

"I could not accept the way the people of my region were treated. As a mother of four children worried for their future, I deeply understood the reasons that led those young men and women to protest asking for a decent living and social justice.

“When Nasser Zefzafi and other activists began to gather and create the Hirak movement, I felt the need to join to make my voice heard. I went from the kitchen to the street to ask for universal human rights.”

“Nawal Benaissa is the latest victim of Morocco’s repressive clampdown against the Hirak movement that has seen at least 400 protesters detained and prosecuted.

“Joining peaceful protests and speaking out to demand respect for human rights are not crimes. Nawal Benaissa’s conviction is a clear attempt to intimidate her into silence and criminalise her activism and role in the Hirak movement. The authorities must overturn her conviction and sentence and drop all charges against her immediately.

“Instead of intimidating and harassing critics such as Nawal Benaissa simply for voicing their dissent, Morocco’s authorities should be ensuring the release of all peaceful protesters, human rights defenders, activists and journalists detained solely for exercising their rights to freedom of expression and peaceful assembly.”

Throughout November and December, Amnesty will ask people around the world to take action on behalf of Nawal Benaissa, as part of its largest annual human rights campaign, Write for Rights.

The Hirak movement in northern Morocco began after Mouhcine Fikri, a fishmonger, was crushed to death by a garbage truck in October 2016 as he tried to recover some fish that had been confiscated by local authorities. His death sparked the socio-economic protests that became known as the Hirak movement.

Between May and July 2017, Moroccan security forces arrested and prosecuted hundreds of protesters, including dozens of children. Human rights defenders such as Hirak lawyer Abdessadak El Bouchattaoui were also given prison sentences in trials that fell far short of international fair trial standards.

Throughout this period, the authorities banned several demonstrations and routinely used excessive force against protesters. In August 2017, protester Imad el-Attabi died from head injuries sustained during demonstrations in Al Hoceima the previous month. The authorities said that they were investigating the circumstances in which he was injured, but to date no findings have been made public.