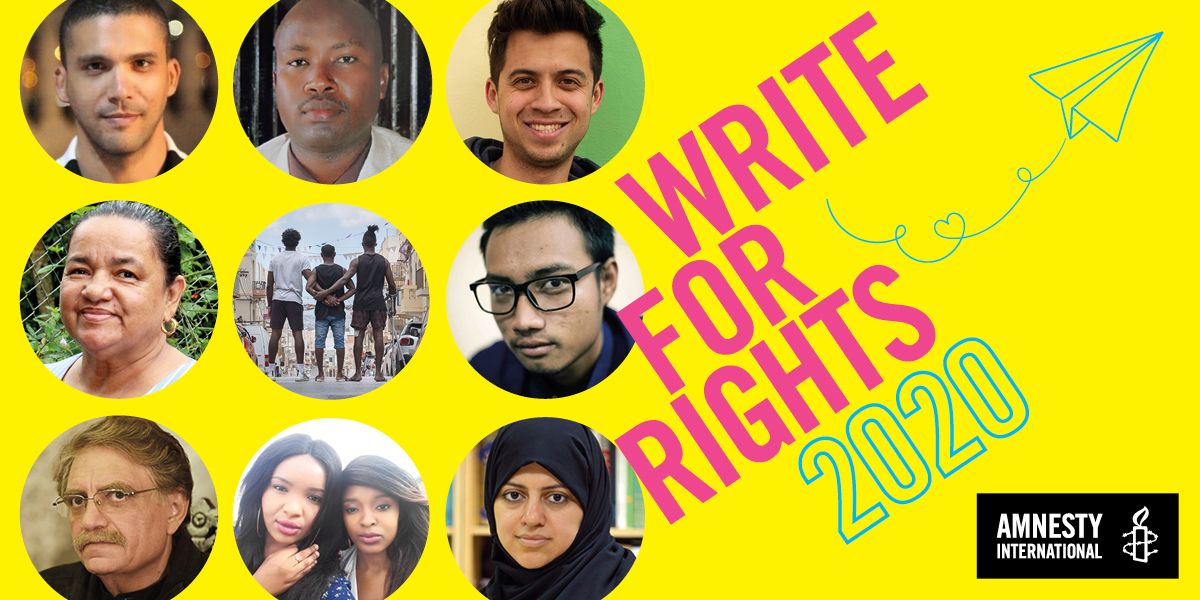 People across the UK join the world’s largest letter writing action to support individuals who have been attacked, jailed, harassed or disappeared

Amnesty International has today launched its flagship annual letter-writing campaign, Write for Rights, to help change the lives of people around the world who have been attacked, jailed, harassed or disappeared for standing up for their rights.

During Write for Rights - which takes place between November and December each year - people around the world will send millions of cards, emails and tweets of solidarity to individuals or groups of people whose freedoms are being denied, or write letters putting pressure on those in power to stop the abuses being committed against them.

This year, the campaign - which is supported by players of the People’s Postcode Lottery - will support ten individuals who are suffering abuses, including:

During last year’s campaign, more than 6 million messages of support were sent. Each letter made a huge difference to people who had put their lives and liberties on the line.

“This year, a global pandemic has shown that in times of extreme difficulty, solidarity is crucial. When people come together and support each other, we gain the strength to carry on.

“This simple principle can change people’s lives, which is why Amnesty International has been writing messages of support to individuals facing human rights abuses for decades. We know that when millions join together, our voices and words have power.

“A simple text, email, tweet or letter can help free individuals from great injustices - from a group of Turkish students facing jail sentences just for protesting the banning of their LGBTI+ Pride march, to a Burundian human rights defender serving a 32-year prison sentence for his peaceful activism.

“Together, we can make enough noise so that those in power will have no choice but to listen and act.”

Write for Rights goes back to the very roots of Amnesty International, which was founded in 1961, with Amnesty’s early campaigners writing letters of support to those affected by human rights abuses, as well as letters of concern to governments around the world.

Letters written during previous Write for Rights campaigns have: