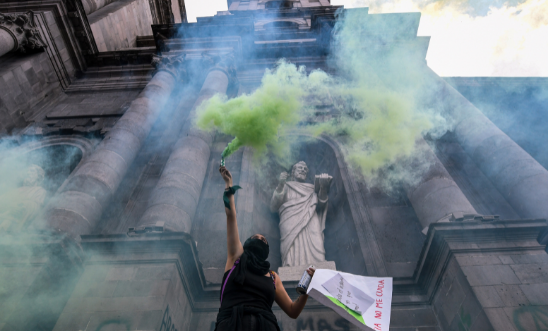 Women take part in demonstrations to demand justice for victims of femicide and stop violence against women: March 8, 2021 © Barcroft Media via Getty Images

The shocking epidemic of disappearances and femicides in Mexico continue to go largely uninvestigated by the country’s authorities, hampering the judicial process and making it increasingly likely that perpetrators will remain unpunished, said Amnesty International in a new report released today.

Last year alone 3,723 murders of women were registered in Mexico, of which 940 were investigated as femicides in the country’s 32 states – this equates to at least ten women being killed every day. Around a third of victims were killed for reasons relating to their gender.

The cases documented were those of:

The report reveals how the authorities’ investigations into femicides in Mexico are failing because evidence is lost, the level of investigation is inadequate, and there’s a lack of understanding on gender perspective.

The report found that victims’ relatives – generally women – take the lead in investigations and use their own resources to do so. The authorities not only draw on families’ investigation efforts but have also attempted to normalise the situation where officers will sometimes wait for families to make progress before continuing with their own investigations.

In some instances, the authorities threaten and harass families so that they do not bring the case to the attention of their superiors. But they also face dangerous threats from perpetrators and do not receive protection from authorities.

“The threats caused me a lot of stress. My weight went down to 40 kilos. I suffered from anxiety, a terrible level of stress.”

The report also shows that the State of Mexico Attorney General’s Office does not have the necessary framework to carry out such investigations: staff workload is already over capacity, and they lack the material resources to carry out a number of procedures.

Amnesty found that the failings documented in the investigation result in violations of women’s rights to life and physical safety and their families’ rights to judicial protection and access to justice.

“Violence against women must be a high priority on the agenda of the federal and local governments. They must prevent, investigate, and punish femicides with due diligence.

“Each femicide has an appalling impact on the victims’ families, who, in their search for access to the truth, justice and reparation for the harm done, also suffer re-victimisation by the authorities.

“We will continue to raise our voices together with the victims’ families and support them in their search for truth, justice and reparation for the harm suffered, until they are heard.”

Women in Mexico: Campaigning for change

Amnesty has launched the #HastaSerEscuchadas (Until They Are Heard) campaign which aims to ensure that the authorities publicly acknowledge the failings in the investigations of femicides, comply with the movement’s recommendations and initiate a process to provide reparations for the harms caused by these failings.

To protect the rights of victims, Amnesty has also made the following recommendations: