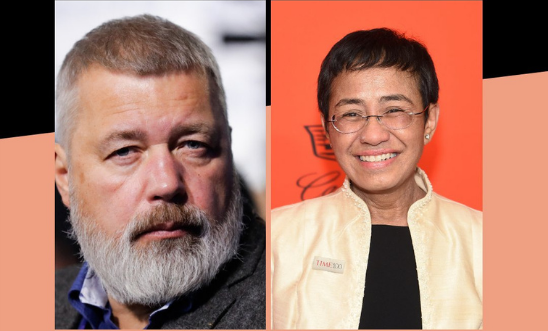 Responding to journalists Maria Ressa and Dmitry Muratov winning the 2021 Nobel Peace Prize in recognition of their fight for freedom of expression in the Philippines and Russia respectively, Agnès Callamard, Amnesty International’s Secretary General, said:

“Maria Ressa and Dmitry Muratov’s Nobel Peace Prize win is a victory not only for independent, critical journalism in The Philippines and Russia, but for the fight for justice, accountability and freedom of expression all over the world.

“For more than three decades, Maria Ressa has worked tirelessly as a journalist in the Philippines, carrying out vital investigative reporting on corruption, abuses of power, and human rights violations in President Rodrigo Duterte’s deadly so-called war on drugs. As the co-founder of Rappler, a highly lauded and uncompromising online news site, she’s opened the world’s eyes to the brutality and pervasive impunity in the Philippines. Put simply, she is a global icon for press freedom.

“Dmitry Muratov has been a rock for free media in Russia, his newspaper producing hard-hitting, fearless journalism in the face of mortal danger in the country’s increasingly perilous press environment. He is one of the few who continue to hold power to account. We salute the indefatigable professionalism and courage not only of Mr Muratov, but of all those Russian journalists who have suffered while carrying out their professional duties.

“The Russian and Philippines authorities must take note of Dmitry Muratov’s and Maria Ressa’s Nobel Peace Prize win and end their relentless attack on press freedom.”

Maria and Dmitry’s work for freedom of expression

In January 2012, Maria Ressa co-founded Rappler, an online news website critical of Philippine President Rodrigo Duterte and his administration’s murderous “war on drugs”. She also serves as the publication’s CEO.

Under the Duterte administration, Maria Ressa, former journalist Reynaldo Santos and Rappler’s directors have collectively faced threats and multiple lawsuits and investigations, including alleged tax violations and violations of the prohibition against foreign control over mass media.

In June 2020, Maria Ressa was found guilty of “cyber libel” after being convicted under the controversial Philippines Anti-Cybercrime law. For this conviction and if she is found guilty under a myriad of other charges, she faces up to sixty years in prison. Amnesty International was among numerous rights groups around the world that condemned her conviction as an attack on press freedom.

Dmitry Muratov co-founded Novaya Gazeta in 1993 and has been its editor ever since. According to the Committee to Protect Journalists, at least six of its journalists, including Anna Politkovskaya, have been murdered during the course of their professional duties.

Dmitry Muratov and his Novaya Gazeta colleagues have over the decades provided essential public interest information to Russia society, in the continuing face of attacks, threats and imprisonment.

In recent months an increasing number of media organisations and journalists have been designated “undesirable organisations” or “foreign agents”, either halting their work or imposing severe administrative and financial constraints.