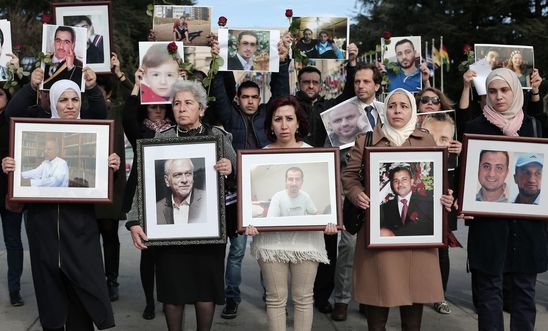 ‘No-one is free until we’re all free’

Amnesty International UK and The Syria Campaign are hosting an event with a prominent group of Syrian women in London on Monday 9 October to highlight the plight of thousands of detainees and those “disappeared” in Syria.

The event - a panel discussion followed by informal drinks reception - will see the activist Families for Freedom group speaking to a UK audience for the first time.

Speakers will include Noura Ghazi Al Safadi, widow of the prominent Syrian human rights activist Bassel Khartabil, whose extrajudicial execution in detention at the hands of the Syrian authorities in 2015 was revealed in August this year. Al Safadi is a lawyer and human rights activist whose work dates back to the period before Syria’s uprising and bloody conflict.

Also speaking at the event will be: Amina Khoulani, a women’s rights activist based in Lebanon who has three brothers detained by the Syrian authorities; Fadwa Mahmoud, a veteran human rights activist based in Germany who has suffered the “disappearance” of her husband and son in Syria; Dr Hala Al Ghawi, a medical doctor based in Turkey whose younger brother has been “disappeared” in Syria; Ghada Abou Mesto, an activist from Damascus whose husband is “disappeared” in Syria; Asmaa Al Saqqa, an activist (now based in Manchester) whose father is detained in Syria; and Bayan Shurbaji, an activist from Dayara (now based in Leeds) who has two brothers detained in Syria.

The event is part of Amnesty’s ongoing campaign for justice for those who have suffered grievous human rights abuses during the past six-and-a-half years of unrest and conflict in Syria.