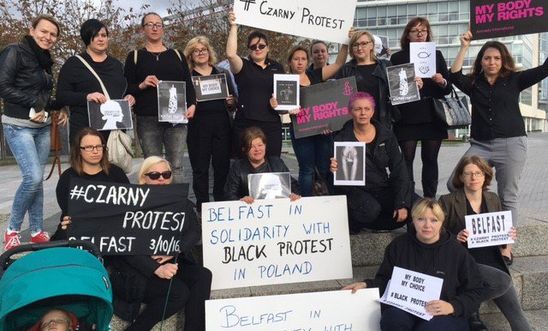 Hundreds of women, dressed in black, will gather outside the Polish embassy in London this evening to protest against the proposed new laws that will effectively ban abortion in all circumstances in the country.

The demonstration is in solidarity with women in Poland who have gone on strike today against the proposals, which seek to criminalise those who have sought or had an abortion, making them liable to a prison term of up to five years. The changes would also increase the maximum jail term for anyone who assists or encourages them have an abortion. Protestors will be wearing black as a sign of mourning for women’s reproductive rights in Poland.

Official strikes are taking place in over 60 Polish cities. Some businesses, universities and corporations have closed as part of the strike whilst others have enabled their female staff to participate in the protests. There are similar solidarity protests taking place in cities across the world.

“Poland’s abortion law is already one of the most restrictive in Europe and these proposals are an all-out assault on women and girls and their right to make decisions about their own bodies.

“A woman who needs an abortion is not a criminal and decisions about her body and her health should never be placed in the hands of politicians.”