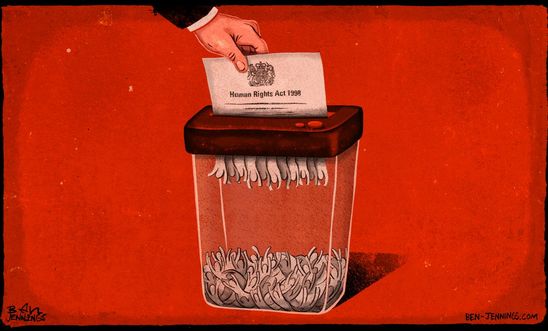 ‘Hillsborough shows how vital the Human Rights Act is to ordinary people when all other avenues of justice fail. We mustn’t let politicians tear up those hard-won protections’ - Kate Allen

A diverse coalition of more than 130 of the UK’s most prominent organisations - ranging from religious and professional bodies to law firms, unions, environmental charities and the families of terrorism victims - have today publicly committed to oppose any attempt to repeal the Human Rights Act.

As the Government confirms its intention to replace the Act with a weaker “British Bill of Rights” in the Queen’s Speech, 135 organisations have pledged to fight the proposals.

Among them are Friends of the Earth, Refuge, the Association of Teachers and Lecturers, the Muslim Council of Great Britain, the National Union of Students, Quakers in Britain, the Royal College of Psychiatrists, the TUC, Carers UK, Scotland’s Children and Young People’s Commissioner, the Terrence Higgins Trust, Stonewall, René Cassin, the Down’s Syndrome Association, the Football Supporters’ Federation and UK Families Flight 103 - the group representing families of the UK victims of the Lockerbie bombing.

The Human Rights Act enshrines fundamental freedoms into UK law and allows the British public to challenge abuse, neglect or mistreatment. Its introduction in 2000 triggered positive changes in legislation and public policy UK-wide, ensuring all authorities treat people with fairness, dignity and respect.

Details of the Bill’s content have yet to emerge - but all Government plans published to date suggest the “British Bill of Rights” would diminish rights protections for everyone in the UK and some groups in particular, threatening the very concept of the universality of human rights, and allowing politicians to choose which and whose matter most.

The pledge reaffirms that human rights are universal, indivisible and inalienable - not a privilege to be given and rationed by any Government. It reads:

“We believe in fundamental human rights and freedoms - shared values that protect every member of the human family and the society we seek to build together.

“We pledge to oppose any Government plans to repeal our Human Rights Act - in so doing we stand firm on guaranteeing universal human rights protections for generations to come.”

“Hillsborough shows how vital the Human Rights Act is to ordinary people when all other avenues of justice fail. We mustn’t let politicians tear up those hard-won protections.

“Walking away from the Human Rights Act would also threaten to bring down the crucial peace agreement in Northern Ireland.

“These diverse organisations speak as one in defending the Human Rights Act. They join all the devolved administrations, all major opposition parties, Conservative rebels, anti-apartheid activists and thousands of ordinary people in opposing divisive and discriminatory plans to replace human rights with Government-sanctioned privileges. There is a long struggle ahead, but as the chorus of condemnation grows, how much longer can the Government refuse to listen?”

“Whilst we still await the details, we are saddened the Government is ploughing ahead with plans to scrap our Human Rights Act, the Bill of Rights we already have. Today the British Institute of Human Rights is proud to stand alongside so many who recognise that the hallmark of a genuine bill of rights is its ability to protect everyone when the government doesn’t play by the rules, which the Human Rights Act does very well. We urge the Government to scrap these miserable plans.”

The Human Rights Act pledge is supported by the following organisations:

Act for the Act

Association of Teachers and Lecturers

Campaign for Freedom of Information

Centre of European Law and Internationalisation

Friends of the Earth

Office of the Older People's Commissioner for Wales

Office of the Older People's Commissioner for Wales

Race on the Agenda

Together – Scottish Alliance for Children’s Rights