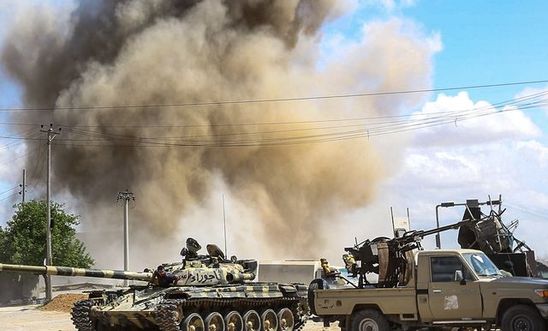 Threats to kill women and babies, while corpses of fighters paraded in grotesque incidents

New evidence obtained by Amnesty International indicates that war crimes and other violations may have been committed between 13 April and 1 June by warring parties in Libya during the latest surge in fighting near Tripoli.

Amnesty has examined scores of incidents through witness testimonies, satellite imagery and analysis of open-source photos and videos - providing mounting evidence of looting, the indiscriminate shelling of civilian neighbourhoods, the planting of anti-personnel landmines in civilian buildings, and the parading of corpses (see details below).

A recent escalation in fighting in Tripoli’s suburbs and in western Libya - with several towns changing hands between armed groups affiliated with the internationally-recognised Government of National Accord and the self-styled Libyan National Army - has seen a recent escalation in unlawful retaliatory attacks.

On 13 April, the Government of National Accord’s Surman command issued a statement warning its troops against such retaliatory acts, committing itself to investigating such “individual incidents”. However, to date, no commanders or fighters implicated in these crimes have been held to account or removed from active duty.

Amnesty is calling on all warring parties and associated forces in Libya to immediately halt attacks against civilians and other violations of international humanitarian law, including those being carried out to punish civilians for their perceived affiliations with rival groups. Amnesty is also calling on members of the UN Human Rights Council to urgently establish a Commission of Inquiry or similar mechanism to investigate violations of international humanitarian law and other human rights violations, determine responsibility and preserve evidence of crimes in order to secure justice for the victims.

Despite a comprehensive UN arms embargo in place on Libya since 2011, the UAE and Russia have provided significant military support to the Libyan National Army, while Turkey has backed the Government of National Accord. There have been numerous illicit arms transfers and direct military support, and Amnesty is currently carrying out investigations into this influx of military equipment and foreign fighters.

“Civilians in Libya are once again paying the price, as all parties escalate retaliatory attacks and other grave violations showing utter disregard for their lives and the laws of war.

“We are calling on all parties to the conflict and affiliated militias and armed groups to immediately halt indiscriminate attacks and other serious violations carried out against civilians associated with rival groups. Commanders must publicly condemn these acts.

“Countries such as Turkey, Russia and the UAE must cease violating the UN arms embargo.”

On 13 April, Government of National Accord-affiliated forces using Turkish arms and equipment captured the cities of Surman and Sabratha, and several towns west of Tripoli. Witnesses told Amnesty that these forces looted several civilian houses and public buildings, including the Sabratha main hospital, setting homes on fire. Amnesty also verified a photo published on social media by a Government of National Accord fighter, showing fellow fighters celebrating next to the corpses of several Libyan National Army combatants.

Video footage analysed by Amnesty shows further incidents of retaliation against civilians for their perceived affiliation to one side or another. One video shows armed men looting civilian property in the town of Al-Asabah, 75 miles south of Tripoli, after Government of National Accord forces took control on 21 May.

In another video posted on social media on 30 April, again verified by Amnesty, a Government of National Accord-affiliated fighter is seen threatening “Kaniyat forces” (aligned with the Libyan National Army) that they would “not to leave a single woman alive” when they capture the town of Tarhuna, south-east of Tripoli. Meanwhile, Kaniyat forces have themselves committed serious violations against civilians in Tripoli and Tarhuna.

Meanwhile, another video on the personal page of a Libyan National Army fighter examined by Amnesty shows him threatening to kill anyone in Benghazi, along with “those in his house even if babies”, if they mourn those who died fighting with the Government of National Accord. Amnesty verified one video showing the Libyan National Army first infantry brigade parading fighters’ corpses in a pick-up truck, while calling a captured Government of National Accord fighter a “Syrian dog” on 18 April.

There is mounting evidence of the use of anti-personnel landmines in flagrant violation of an international ban on their use.

Residents told Amnesty that on or around 22 May, forces aligned with the Libyan National Army placed anti-personnel landmines as they withdrew from the neighborhoods of Ain Zara and Salah el-Din south of Tripoli. At least one civilian was killed by a landmine when he returned to his house on 22 May, according to his family.

There is evidence that Libyan National Army-affiliated forces have laid extensive tripline-activated anti-personnel landmines and other booby-traps in homes and other civilian objects. Photos and videos verified by Amnesty show Russian and Soviet-era anti-personnel landmines - including MON-50s, MON-90s, OZM-72s and MS3s - prohibited by international law due to their indiscriminate nature. Foreign personnel employed by the Russian military company Wagner were observed leaving areas shortly before landmines were discovered.

Civilian neighbourhoods shelled by both sides

During the course of April and May, Libyan National Army forces shelled civilian neighborhoods in Tripoli, resulting in civilian casualties and damage to property in the neighborhoods of Ain Zara, Tariq el-Sour, Souq al-Talata, and Souq El-Joma. Amnesty has verified images of the aftermath of these attacks, showing civilians who had been killed and wounded. Witnesses and a medical source confirmed to Amnesty that an attack launched by Libyan National Army forces on Souq Al-Talat on 31 May left at least three civilians dead and 11 wounded, including a child whose leg was amputated.

Meanwhile, Government of National Accord-aligned forces carried out indiscriminate attacks during April and May in Tripoli’s suburb of Qasr Bin Ghashir, Beni Walid, Tarhuna and close to Ash Shwayrif village - again with civilian casualties reported. At least one girl was killed by shelling in Qasr Bin Ghashir on 1 June, according to witnesses, while several buildings were damaged, with photos of the damage verified by Amnesty.

An Amnesty investigation last year into the fighting in Libya found that both sides and their affiliated forces had been responsible for indiscriminate and disproportionate attacks, as well as the use of a range of inaccurate explosive weapons in populated urban areas.