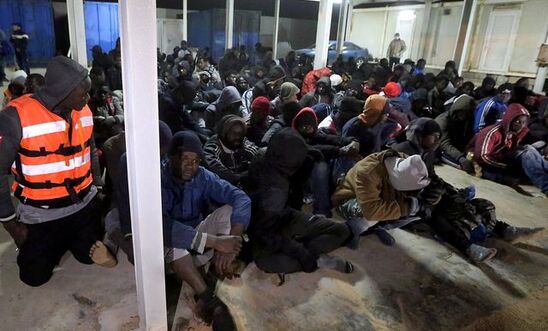 EU-supported Libyan Coast Guard intercepted more than 8,000 people in Mediterranean so far this year, forcing them back to high-risk Libya

Testimony from more than 30 refugees and migrants provides shocking new evidence of abuse, including torture, disappearance and forced labour

Tens of thousands of refugees and migrants in Libya are trapped in a vicious cycle of cruelty, Amnesty International said in a new report today.

After enduring dreadful suffering in war-torn Libya, people are risking their lives at sea to seek safety in Europe only to be intercepted and forcibly taken back to Libya where they are subjected to enforced disappearances, detention, torture and extortion.

Amnesty’s 58-page report - ‘Between life and death’: Refugees and migrants trapped in Libya’s cycle of abuse - shows how EU countries - most notably Italy - have collaborated with the Libyan authorities in this abuse, by providing speedboats, training and assistance.

Since 2016, an estimated 60,000 men, women and children have been captured at sea and taken back to Libya by the EU-supported Libyan Coast Guard - 8,435 between 1 January and 14 September this year alone.

Amnesty’s report - based on in-depth interviews with 32 refugees and migrants, as well as an examination of videos, photographs and satellite imagery - documents harrowing accounts of people who have suffered or witnessed a litany of abuses in Libya. Abuses include: unlawful killings; enforced disappearances; torture and other ill-treatment; rape and other sexual violence; arbitrary detention; and forced labour and exploitation at the hands of government authorities or militia groups.

Those returned to Libya are frequently held in official Directorate of Combatting Illegal Migration detention centres under the authority of the ministry of interior of the UN-backed Government of National Accord, which controls western Libya. In addition, this year alone thousands have been subjected to enforced disappearance after being transferred to unofficial places of detention, including the Tobacco Factory (a reference to its former function) under the command of a Government of National Accord-affiliated militia led by Emad al-Trabulsi in Tripoli. There are serious concerns for the safety of those held at the Tobacco Factory.

Dozens of refugees and migrants described to Amnesty witnessing the death of their loved ones while detained at a Directorate of Combatting Illegal Migration centres or in places of captivity run by traffickers. In one incident on 27 May, gunmen opened fire on some 200 people held by traffickers near the town of Mazda, killing at least 30 and injuring 11. The others remain unaccounted for - feared dead or abducted.

Amnesty has verified videos showing militias parading and abusing refugees and migrants. One person told Amnesty that in May a militia affiliated with the Government of National Accord took him and other refugees and migrants from a Directorate of Combatting Illegal Migration detention centre and forced them to transport ammunition between two positions in Tripoli amid an ongoing battle in the city.

“The EU and its member states continue to implement policies trapping tens of thousands of men, women and children in a vicious cycle of abuse, showing a callous disregard for people’s lives and dignity.

“The EU should make any further support conditional on immediate action to stop horrific abuses against refugees and migrants.

“This would include ending arbitrary detention and closing immigration detention centres. Until then, anyone rescued or intercepted in the central Mediterranean should not be returned to Libya, but instead be allowed to disembark in a place of safety.”

In Libya, refugees and migrants live under constant risk not only of being arrested and sent to detention centres, but also of being abducted by militias, armed groups and traffickers - including for forced labour. Some have been tortured or raped until their families pay ransoms to secure their release. Others have died in custody through violence, torture, starvation or medical neglect.

Refugees and migrants are facing rampant racism and xenophobia in Libya, with government officials, members of armed groups and militias, and media worker all regularly using racist language to refer to black people, while also publicly blaming refugees and migrants for the spread of COVID-19 in Libya.

Given the horrific conditions and abuses, existing resettlement and evacuation programmes are completely insufficient for providing safe and legal pathways out of Libya for those in need, said Amnesty, with only 5,709 vulnerable people benefiting from such programmes since 2017. This reflects the small number of resettlement pledges made by other countries, including EU ones. COVID-19 travel restrictions have further exacerbated the situation, with only 297 people evacuated from Libya this year, before borders closed in March.

“Right now refugees [are] going to cross the sea... [There is] no evacuation and no resettlement … Refugees in Libya are at risk. [We are] between life and death.”

Desperate refugees and migrants have few viable ways out of Libya other than crossing the Mediterranean on unseaworthy boats. Crossings continue to be extremely dangerous, including because of interceptions by the Libyan Coast Guard and criminal groups. In one deadly incident in mid-August, survivors told Amnesty that armed men on a boat named “Captain al-Salam 181” robbed them and then fired at their vessel, causing the engine to catch fire and the boat to capsize. An estimated 40 people died after being left at sea.

Downloads
Between life and death