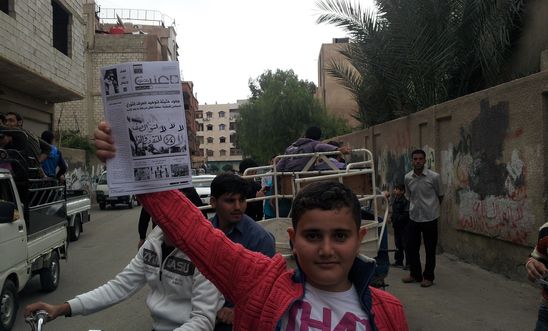 On Tuesday 26 November, Amnesty International UK is hosting the launch of a new book of citizen journalism from the Syrian conflict.

The 246-page publication - Enab Baladi: Citizen Chronicles of the Syrian Uprising - gathers together reportage from a network of journalists who have contributed to a remarkable feat of Syrian journalism.

Enab Baladi is a weekly newspaper which emerged from the Damascus suburbs of Daraya in January 2012, launched as a revolutionary publication to provide a voice to Syria’s voiceless. Since then, Enab Baladi has been published every Sunday, with just a two-week stoppage in August 2012 after a Syrian Government massacre in Daraya. Enab Baladi has become one of Syria’s most prominent media organisations, reaching millions of Syrians inside and outside the country.

This is the first collection of Enab Baladi articles to be published in English, in a book which charts the evolution of the paper, its journalists, and the Syrian uprising which gave birth to the paper. The book will be available to purchase on the night, with all proceeds going to support Enab Baladi’s work in upholding independent, free journalism in Syria.

“Enab Baladi is a unique record of the Syrian people speaking without fear - exactly what the Assad government has so ruthlessly tried to crush. Enab Baladi is the best of Syrian journalism and deserves our admiration and support.”

Enab Baladi: Citizen Chronicles of the Syrian Uprising (Enab Baladi; eds Joey Ayoub, Alice Gutherie and Amer Doko) will be available to buy at the event (£5, cash only)