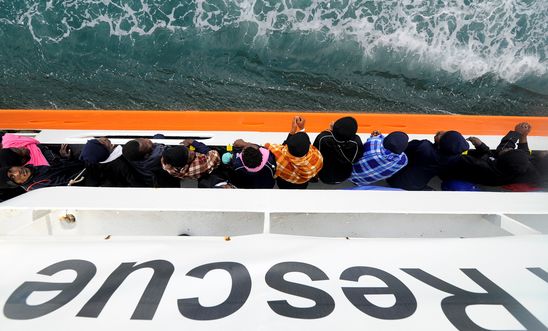 Migrants wait to disembark from Aquarius in the Sicilian harbour of Catania, Italy, May 27, 2018 © REUTERS/Guglielmo Mangiapane

Responding to reports that the authorities in Italy and Malta have closed their ports to the Aquarius, with 141 people aboard - including 73 children - Maria Serrano, Amnesty International’s Senior Campaigner on Migration, said:

“Italy and Malta’s disgraceful refusal to allow refugees and migrants to disembark in their ports is pure cruelty.

“These individuals have braved dangerous journeys and inhumane conditions in Libya only to be stranded at sea as governments shamelessly abdicate their responsibility to protect.

“We are calling on European leaders to urgently agree on a predictable and reliable search-and-rescue system that ensures the prompt disembarkation of survivors at the closest safe port, upholds the law of the sea and the primacy of saving lives in the Mediterranean.

“Coastal States must ensure their ports are open to those who have been rescued, and other European governments must share the responsibility of processing asylum claims by taking in asylum-seekers.”

Spiralling deaths in the Mediterranean

Last week Amnesty published a new report showing how Europe’s policies towards refugees and migrants are responsible for a recent rise in deaths in the Mediterranean and dramatic rise in the number of people held in squalid detention centres in Libya.

The report shows how deaths of refugees and migrants at sea spiralled to more than 700 along the central Mediterranean route in June and July this year alone. The rapid increase in the number of drownings has been accompanied by a dramatic rise in the number of people held in overcrowded and inhumane detention centres in Libya.