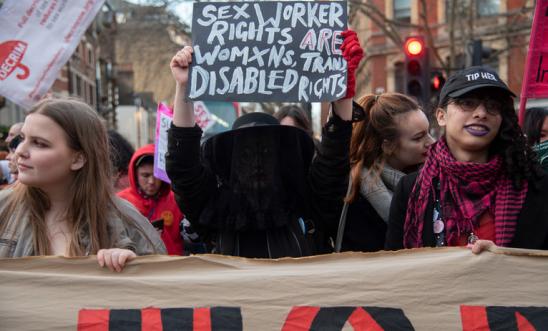 ‘The only time I would call the cops would be if I was dying on the floor. …I’d personally rather be at risk with a client than with a police officer’ - Sex worker

A 2017 law purportedly designed to protect human trafficking victims and sex workers from exploitation in Ireland is instead facilitating the targeting and abuse of sex workers, and the state is failing to protect them from violence, Amnesty International said in a report published today.

The report - "We live within a violent system": Structural violence against sex workers In Ireland – is based on interviews with sex workers and reveals how the criminalisation of aspects of sex work is forcing sex workers to take more risks as they avoid the police, putting their lives and safety in jeopardy.

The Irish government is currently conducting a review of Part 4 of the Criminal Law (Sexual Offences) Act which, since 2017, has criminalised the purchase of sex and significantly increased penalties for brothel keeping – two or more sex workers selling sexual services from the same premises – to a 5,000 euro fine or a jail term of up to 12 months.

The majority of the sex workers interviewed for the research want sex work fully decriminalised in Ireland, including the purchase of sex. They also said that sharing premises with other sex workers helps to increase their safety and limits the potential risk of violence.

“One-to-one, a woman with a man, we don’t stand a chance. We need another girl. She can hear what’s happening… But to be alone, it’s very dangerous.”

Another sex worker told Amnesty: “One night I was going down a cul de sac that was discreet, so I wasn’t going to be found by the Gardaí [Irish police]…they couldn’t drive by the spot we were in. But at the same time, I had no escape route if anything went wrong…And that was a very direct result of the Garda presence there targeting clients.”

Polling conducted by Amnesty in December 2021 revealed that 70% of people in Ireland believe sex workers should be consulted on any law that directly affects them while 73% felt that sex workers have a right to make decisions about their bodies and lives.

“Laws intended to protect sex workers are putting them at higher risk of abuse and violence, including rape and physical attacks. This is what sex workers are telling us about the actual impact of the 2017 law, and the Irish government needs to start listening to them.

“Our research clearly shows that criminalising the purchase of sex is forcing sex workers to take more risks, while penalising brothel-keeping is preventing sex workers from working together to ensure their own safety.”

The police: ‘A threat, not a shield’

The research also shows how the lack of trust in the police and social stigma reinforced by the criminal law are key concerns for sex workers.

The overwhelming majority of sex workers interviewed reported experiencing violence while engaging in sex work. Yet sex workers also reported being fearful of the police. Among the reasons given for preferring not to engage with the Gardaí when experiencing violence were a lack of trust and a belief that no action would be taken. In addition, sex workers expressed a fear of harassment or violence at the hands of the Gardaí, as well as their landlords being notified or targeted, which could lead to eviction and homelessness.

“I see the Gardaí as a threat rather than as a shield.”

Another sex worker told Amnesty: “It has to be 100% decriminalised. When it’s not, I’m scared to report to cops or others. In every other business, if there are bad clients, if anything happens to you, you can call the police... It’s more about creating a safer environment for us.”

Migrant sex workers’ fears of contacting the police stem from the risks they face because of their immigration status or plans to apply for Irish citizenship.

“The only time I would call the cops would be if I was dying on the floor. …I’d personally rather be at risk with a client than with a police officer.”

For many of those interviewed, the criminalisation of paying for sex adds to the already high levels of societal stigma and discrimination they experience on other grounds, such as race, ethnicity, gender, gender identity, disability, drug use, homelessness or migrant status.

The research highlights the lack of data on sex workers’ experiences and the government’s reliance on outdated and flawed research that conflates human trafficking for sexual exploitation with sex work. It also highlights that the state failed to sufficiently consult sex workers when drafting the 2017 law.

“The review of the law represents a vital opportunity to ensure that it actually protects sex workers.

“But if this is to happen, sex workers themselves must be meaningfully consulted so that their lived experiences can inform the laws and policies that are meant to protect them.”