Iraq: rein in security forces to prevent a bloodbath 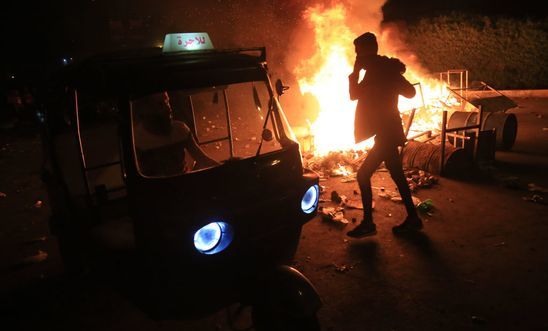 Iraqi authorities must immediately rein in security forces after at least six protesters were killed in central Baghdad today amid a police operation to clear demonstrations from several bridges and streets near Tahrir Square, Amnesty International said after interviewing multiple eyewitnesses by phone.

“Baghdad and Basra have seen yet more bloody days of excessive force meted out against protesters. Iraqi authorities must immediately order an end to this relentless, unlawful use of lethal force.

“There have now been at least 264 protester deaths across the country in little over a month. This is turning into nothing short of a bloodbath – all government promises of reforms or investigations ring hollow while security forces continue to shoot and kill protesters.

“The government of Iraq has a duty to protect its people’s right to life, as well as to gather and express their views. This bloodbath must stop now, and those responsible for it must be brought to justice.”

Medical workers who witnessed the police operation in Baghdad told Amnesty International that four protesters had been shot dead with live ammunition and two others died of injuries resulting from tear gas grenades striking their heads. A video purporting to be from the scene showed a tear gas grenade lodged in a man’s skull as he lay lifeless in the back of a vehicle.

Amnesty International has documented at least nine other cases of military-grade tear gas and smoke grenades killing protesters in Baghdad since 25 October, and has called for an immediate halt to their use in crowd control as they are highly lethal.

One of the medics told Amnesty International that he had witnessed security forces charging into al-Rasheed Street and throwing tear gas at protesters. He said tents being used by the medics caught fire in the fray, destroying medical equipment worth thousands of dollars.

Another medic described similar destruction of medical equipment when security forces moved in on protesters on al-Sinak Bridge. He said security forces stormed the tent where injured protesters were being treated and then threw tear gas canisters on the ground inside the tent, which caught fire. Medics had to flee, carrying the wounded and leaving medical equipment behind. The attack also destroyed a tuk-tuk that was being used to ferry injured protesters to ambulances – and which was clearly marked for this purpose.

Internet access was briefly restored for several hours on Saturday, but according to the NGO Netblocks and multiple reports from activists on the ground, it was shut down again across much of Iraq from around 17:15 local time.

On 1 October 2019, nationwide two-week protests over unemployment, corruption and poor public services broke out in Iraq. The protests were renewed on the night of 24 October in Baghdad and other provinces of Iraq including Karbala, Basra, Babel and Diwaniya. During this latest wave of protests, Amnesty International documented the excessive, and in dozens of cases, lethal use of force by security forces to disperse protesters, including with tear gas, live ammunition and deadly sniper attacks. The organisation has also documented a relentless campaign of intimidation and assault against activists in Baghdad, including enforced disappearances. Amnesty International continues to receive reports of excessive force used to disperse protesters and new cases of arrest and intimidation of protesters.