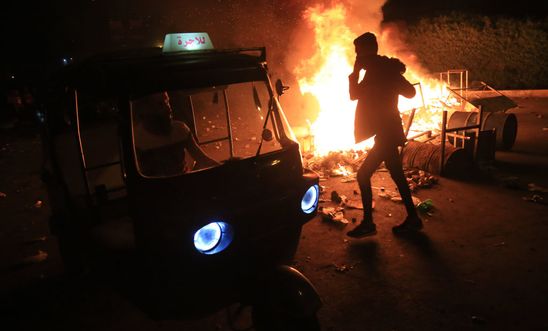 “In horrific scenes in Karbala last night, Iraqi forces opened live fire on peaceful protesters and resorted to excessive and often lethal force to disperse them in a reckless and utterly unlawful manner.

“According to international law, security forces should refrain from the use of firearms unless there is an imminent threat of death or serious injury and there is no suitable alternative available. Eyewitness accounts clearly suggest that was not the case.

“Iraqi authorities must immediately rein in security forces to prevent further bloodshed. Iraqi forces must order an independent impartial investigation into events last night in Karbala and ensure all those responsible are held accountable for their actions.”

Use of live fire, tear gas and beatings

One eyewitness in Karbala told Amnesty that security forces had attempted to chase away protesters using tear gas and batons on previous days, but that the violence used last night was far more extreme.

He said: “Security forces opened fire on the protesters they were chasing. There was a black four-wheel drive that started to drive towards the roundabout and attempted to run over the protesters. It was complete horror. There were women and children. The children were screaming. The security forces dispersed everyone and started chasing them into the side streets.”

Another eyewitness told Amnesty that army officers at first verbally warned protesters not to cross the gate to the government buildings near the roundabout where protesters have gathered since 24 October. Some of the protesters ignored the warnings and approached the area but were driven back by tear gas and sound grenades.

He said: “They used a lot of tear gas. Even the army was suffocating and started leaving. When the army left, the protesters started burning tyres and trash. Around 8pm they started using live ammunition to disperse us. At first it was a little, then it started increasing.”

The eyewitness said that at around 11pm, anti-riot police cars began charging towards the peaceful protesters, attempting to run them over. He said the tactic of using cars to run over protesters was also used in protests over the weekend.

Another protester said he was attending the protest when he heard gunshots coming from the area near the government buildings. He described how security forces dressed in black were chasing protesters.

He said: “There were about seven to 10 cars driving fast towards us and the men inside were shooting in the air to scare people. We all started retreating… protesters and the army were injured alike. These other forces started catching people and beating them, even young boys. They beat them so savagely. They grabbed me and started hitting me on my head. The live fire was non-stop. It was complete horror. There were children as young as 12 among the protesters.”

A doctor at al-Hussein hospital in Karbala interviewed by Amnesty said protesters arrived at the emergency room last night with shrapnel and gunshot wounds including in the leg, stomach, eye and head. The doctor added that they had also received several protesters injured due to beatings in recent days, and that on 27 October security forces in plainclothes had visited the hospital and arrested around 50 people suspected of participating in protests.

He said: “They arrested a lot of people from the hospital. They even took children. One of the protesters they took was 14-years-old.”

A second wave of protests erupted on 24 October in Baghdad and other governorates across Iraq including Diwaniya, Thi Qar, Basra, Karbala, Najaf, Maysan and Babel. According to the Independent High Commission for Human Rights in Iraq, at least 77 protesters have been killed and 3,654 injured in this latest round of protests. Amnesty is calling on Iraqi authorities to end arbitrary arrests and lift the curfews imposed in several areas in the country, including Karbala.