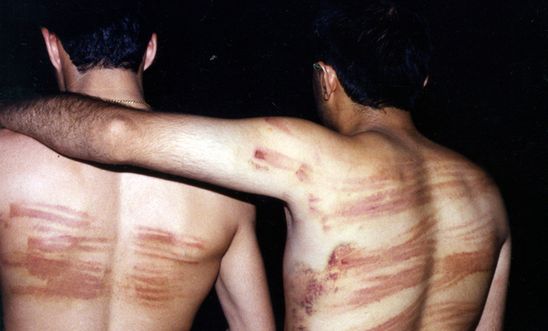 Wave of floggings, amputations and other vicious punishments, with mixed-gender parties targeted

‘Severing people’s limbs, taking away their eyesight and subjecting them to brutal lashings cannot be considered justice’ - Randa Habib

Amnesty International has condemned Iran’s persistent use of cruel and inhuman punishments - including floggings, amputations and forced blinding over the past year.

In the most recent flogging case recorded by Amnesty, a journalist was lashed 40 times in the city of Najaf Abad in Esfahan Province on 5 January, after a court found him guilty of inaccurately reporting the number of motorcycles confiscated by police in the city.

Other journalists and bloggers have also been sentenced to flogging in relation to their work. Last July, an appeal court sentenced journalist Mohammad Reza Fathi to 459 lashes for “publishing lies” and “creating unease in the public mind” through his writing.

Many of those flogged in Iran are young people under the age of 35 who’ve been arrested for peaceful activities such as publicly eating during Ramadan, having relationships outside of marriage and attending mixed-gender parties. In one case last April, an unmarried couple convicted of “having an illegitimate relationship” were sentenced to 100 lashes each. A month later, 35 young women and men arrested in Qazvin Province for dancing, mingling and consuming alcohol at a party, were sentenced to 99 lashes each, with the sentences carried out immediately.

The popular Iranian Facebook site My Stealthy Freedom (“Azadihayeh Yavashaki”), run by the journalist and women’s rights activist Masih Alinejad, has posted detailed accounts from women who’ve been lashed for consuming alcohol and attending mixed-gender parties that were raided by Iran’s morality police. The site also features images showing severe injuries on women’s backs from lashings. In one of the posts, a 28-year-old woman who received 80 lashes for attending a birthday party, described being flogged as “the worst day of [her] life”. She described how, after her arrest, her photograph and fingerprints were taken before she was led to a small room where a middle-aged woman flogged her repeatedly while her feet were in chains and her hands shackled:

“With the impact of the first lash, I jumped out of my [seat] uncontrollably. I was so shocked that even my tears would not drop. I wanted to scream, but I could not even control my voice. Every time she hit me hard, she would ask me to repent so that God would forgive me.”

Another woman, in the city of Robat Karim, near Tehran, was lashed for attending a mixed-gender party to celebrate her engagement. Security forces stormed the party, confiscating bottles of alcohol and questioning and beating guests, before taking some of the attendees to a police station for interrogation. They were forced to spend three nights in jail before being sentenced to 74 lashes each. The woman said:

“I don’t remember how many lashes I had received, but I reached a stage where I was just moaning and had become numb with pain. When I finally arrived home, I was afflicted with a terrible pain on my body while my soul was aching due to the feelings of humiliation and fear that I had lived throughout the entire ordeal.”

Lashing sentences were also carried out last May on a group of 17 miners who protested against their employment conditions and dismissals in West Azerbaijan Province.

Amnesty has also recorded at least four amputations carried out for robberies in Iran, including “cross amputations” of several fingers and toes on opposite sides of the victim’s body.

In addition, Amnesty recorded an incident in November when a man in Tehran was forcibly blinded in both eyes in retribution for blinding a four-year-old girl in an acid attack in 2009. Several other prisoners remain at risk of being forcibly blinded. Disturbingly, doctors from the Legal Medicine Organisation of Iran provide the Supreme Court with “expert” advice on whether the implementation of a blinding sentence is medically feasible and how it can be carried out, seriously breaching medical ethics.

“The latest flogging of a journalist raises alarms that the authorities intend to continue the spree of cruel punishments we have witnessed over the past year into 2017.

“The authorities’ prolific use of corporal punishment, including flogging, amputation and blinding, throughout 2016 highlights the inhumanity of a justice system that legalises brutality.

“Severing people’s limbs, taking away their eyesight and subjecting them to brutal lashings cannot be considered justice.

“Medical professionals have a clear duty to avoid any involvement in acts of torture and other ill-treatment. Rather than aiding and abetting acts of torture by providing pre-blinding medical assessments, doctors in Iran should refuse to participate in such calculated cruelty.”

Hundreds of ‘offences’ punishable by flogging

Under Iranian law, more than 100 “offences” are punishable by flogging. These cover a wide array of acts, ranging from theft, assault, vandalism, defamation and fraud, to acts that should not be criminalised at all - such as adultery, intimate relationships between unmarried men and women, “breach of public morals” and consensual same-sex sexual relations.

As a party to the International Covenant on Civil and Political Rights, Iran is legally obliged to forbid torture and other cruel, inhuman or degrading treatment or punishment. However, Iranian law continues to allow internationally-banned corporal punishments including amputation, stoning and flogging and claims to justify it in the name of protecting religious morals.