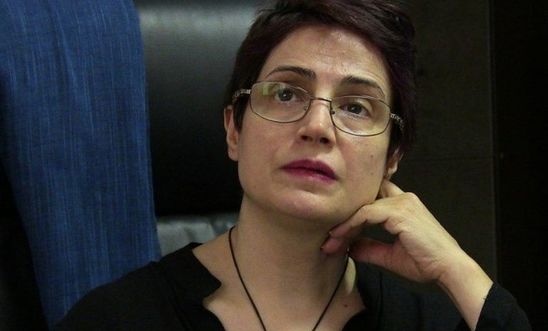 Sentence is harshest against an Iranian human rights defender for years

The sentencing of prominent Iranian human rights lawyer and women’s rights defender Nasrin Sotoudeh to 33 years in prison and 148 lashes in a new case against her is an outrageous injustice, said Amnesty International today.

The sentence, reported on her husband Reza Khandan’s Facebook page, brings her total sentence after two grossly unfair trials, to 38 years in prison. In September 2016, she was sentenced in her absence to five years in prison in a separate case.

The latest sentence is the harshest sentence Amnesty has documented against a human rights defender in Iran in recent years, suggesting that the authorities are stepping up their repression.

Sotoudeh was recently informed by the office for the implementation of sentences in Tehran’s Evin prison where she is jailed, that she had been convicted on seven charges and sentenced to 33 years in prison and 148 lashes. The charges, which are in response to her peaceful human rights work, include “inciting corruption and prostitution”, “openly committing a sinful act by ... appearing in public without a hijab” and “disrupting public order”.

During her sentencing, Article 134 of Iran’s Penal Code was applied, which allows judges to use their discretion to impose a higher sentence than the maximum statutory requirement when a defendant faces more than three charges. In Sotoudeh’s case, the judge, Mohammad Moghiseh, applied the maximum statutory sentence for each of her seven charges and then added another four years to her total prison term, raising it from the statutory maximum of 29 to 33 years.

Meanwhile, in a confusing development, earlier today the Islamic Republic News Agency reported that Mohammad Moghiseh told journalists that Sotoudeh has been sentenced to seven years in prison: five years for “gathering and colluding to commit crimes against national security” and two years for “insulting the Supreme Leader”.

This report did not provide further details or clarify whether the judge was referring to a separate case.

“It is absolutely shocking that Nasrin Sotoudeh is facing nearly four decades in jail and 148 lashes for her peaceful human rights work, including her defence of women protesting against Iran’s degrading forced hijab (veiling) laws.

“Nasrin Sotoudeh must be released immediately and unconditionally and this obscene sentence quashed without delay.

“Nasrin Sotoudeh has dedicated her life to defending women’s rights and speaking out against the death penalty - it is utterly outrageous that Iran’s authorities are punishing her for her human rights work.

“Governments with influence over Iran should use their power to push for Nasrin Sotoudeh’s release.

“The international community, notably the European Union, which has an ongoing dialogue with Iran, must take a strong public stand against this disgraceful conviction and urgently intervene to ensure that she is released immediately and unconditionally.”