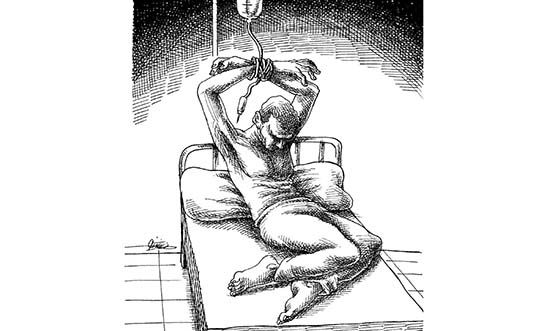 The Iranian authorities are callously toying with the lives of political prisoners by denying them adequate medical care - putting them at risk of irreversible damage to their health or even death - according to a new report by Amnesty International today.

The 45-page report, Health taken hostage: Cruel denial of medical care in Iran’s prisons, provides a grim snapshot of health care in the country’s prisons. It presents strong evidence that the judiciary, in particular the Office of the Prosecutor, and prison administrations deliberately prevent access to adequate medical care, in many cases as an intentional act of cruelty intended to intimidate, punish or humiliate political prisoners, or to extract forced “confessions” or statements of “repentance” from them.

The report gives disturbing details of 18 prisoners who’ve been denied medical care and are at risk of suffering permanent damage to their health.

One prisoner, the 76-year-old UK-Iranian businessman Kamal Foroughi, has been held in Tehran’s Evin Prison since May 2011 after being accused and then convicted of espionage after an unfair trial in a Revolutionary Court. Despite suffering from various medical conditions and needing specialised medical tests - including screening for cancer - Foroughi was only transferred to hospital for a medical check-up last November, four-and-a-half years after being detained. This was followed by a second medical check-up in May, but the authorities have so far withheld the test results from Foroughi and his family. The Iranian authorities have also refused Foroughi’s repeated requests to be released or granted leave on medical grounds.

Kamal Foroughi’s son Kamran, who has been campaigning in the UK for his father’s release, said:

"The whole family has been shocked at the way they blocked my dad from getting the preventative medical care he desperately needed, and even when they eventually let him have health checks a number of standard and cancer-specific tests were still omitted.

“Three months ago dad’s lawyer was told by the Iranian Judiciary and Prosecutor’s Office that dad was on a clemency list, but he still hasn’t been released and we don’t know why. Dad is very old and could die any day and it’s Iran's choice where - in Evin prison alone, or back home surrounded by his loving family who miss him so much.”

“They are toying with individuals’ lives with devastating, lasting consequences to their health.

“Making medical care conditional on obtaining a statement of ‘repentance’ or a ‘confession’ is not only a shameful exploitation of a prisoner’s poor health, but also a clear violation of the absolute prohibition of torture and other ill-treatment.”

Prisoner in danger of going blind, another at risk of death from kidney cancer

One prisoner - Zeynab Jalalian, an Iranian Kurdish woman serving a life sentence in connection with her alleged membership of a Kurdish opposition group - is at risk of going blind because of withheld treatment. She urgently needs an eye operation but the authorities have repeatedly refused to allow her to go to a hospital. Her family believe she was injured when interrogators repeatedly hit her head against a wall, fracturing her skull and causing a brain haemorrhage and vision impairment. Intelligence officers have told her she must provide “confessions” before she gets treatment. Her sister, Deniz Jalalian, told Amnesty: “They said that if she did so, they would not only reduce her sentence but also take her to a doctor.”

In another case, prisoner of conscience Omid Kokabee, a 33-year-old physicist serving a ten-year sentence for refusing to work on military projects in Iran, complained of kidney problems for nearly five years but the authorities ignored his repeated requests for medical care. In April he was diagnosed with advanced kidney cancer and had emergency surgery to remove his right kidney. “He had been waiting for a long time to be transferred to a hospital … but the officials wouldn’t agree to it. Prison doctors never even examined him, and kept prescribing painkillers,” a family member said.  A photograph which recently emerged showing Kokabee chained to his hospital bed when he was hospitalised on a previous occasion in 2015, caused an outcry on social media.

Prisoners interviewed by Amnesty also said that prison doctors were sometimes complicit in the abuse. They said some prison doctors consistently downplayed or outright dismissed their health problems as “figments of their own imagination” and treated serious conditions with painkillers or tranquillisers.

The report also provides a deeply disturbing image of the Office of the Prosecutor, which in Iran is responsible for decisions concerning medical leave and hospital transfers. The Office often refuses to authorise hospital transfers for ill prisoners even though the care they need is not available in prison, and it frequently denies requests for medical leave for critically-ill prisoners against doctors’ advice.

Amnesty is calling on the Iranian authorities to immediately stop denying prisoners access to adequate medical care, in line with their international obligations. The authorities must investigate the prosecution authorities and all other officials - including medical staff - who may be involved in deliberately denying medical care to prisoners.