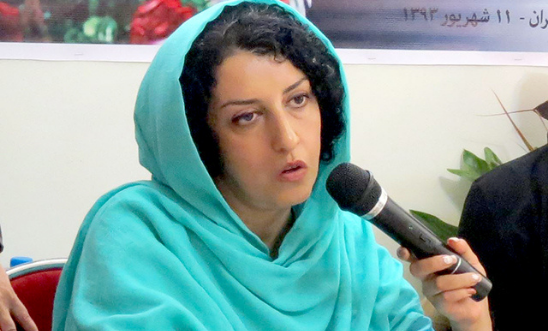 Chair of Iran's Centre for Human Rights Defenders (CHRD), Narges Mohammadi is a longstanding human rights activist who has been repeatedly detained for her work. © Private

Outspoken activist is being held in Tehran’s notorious Evin Prison

‘Narges Mohammadi is a prisoner of conscience’ - Heba Morayef

Amnesty International is calling for the immediate release of the prominent Iranian human rights defender Narges Mohammadi after she was arrested earlier this week and is now at imminent risk of being flogged in jail.

Mohammadi, vice president of the Centre for Human Rights Defenders in Iran, has been the subject of repeated persecution at the hands of the Iranian authorities.

She was arrested on 16 November by agents from Iran’s ministry of intelligence who, according to her husband, brutally beat Mohammadi before taking her to an unknown location.

The following day, Mohammadi called her family and informed them she was in Tehran’s Evin Prison and had been told she was to serve a two-and-a-half-year prison sentence.

In May this year, a court in Tehran sentenced the human rights activist to two-and-a-half years in jail and 80 lashes for charges that included “spreading propaganda against the system”. In September, Mohammadi received a summons to begin serving the sentence but did not respond as she considered the conviction unjust.

Her arrest on Tuesday occurred as she attended a memorial in the city of Karaj for Ebrahim Ketabdar, who was killed by the Iranian security forces during nationwide protests two years ago. Mohammadi has been vocal in her support of bereaved family members seeking truth and justice for their loved ones’ killings during the 2019 protests.

In 2016, Mohammadi was sentenced to 16 years in jail on charges solely related to her freedom of expression and assembly. Following global action, including by Amnesty, she was released in October 2020, yet since then the Iranian authorities have repeatedly harassed her.

“Narges Mohammadi is a prisoner of conscience targeted solely for her peaceful human rights activities and is now at imminent risk of receiving 80 lashes.

“To arrest a human rights defender for calling for truth and justice on the two-year anniversary of the November 2019 protests - where hundreds of men, women and children were killed by Iranian security forces - is a callous act.

“For far too long, the Iranian authorities have subjected Narges Mohammadi to arbitrary detentions, unjust prosecutions, torture and other ill-treatment for her human rights work.

“Amnesty International urges the international community - including the United Nations and the European Union - to speak out about her case.

“We call on the Iranian authorities to immediately and unconditionally release her, quash her unjust sentence and ensure she is protected from all forms of torture and other ill-treatment, including floggings.”