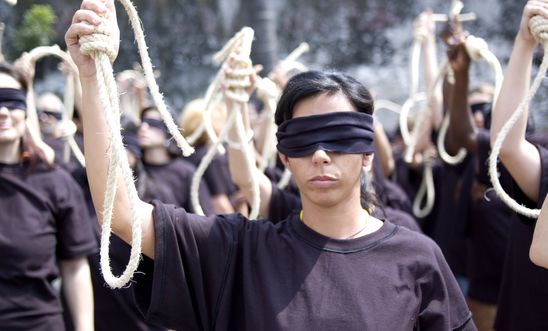 Ramin Hossein Panahi’s trial lasted less than an hour, and torture marks on his body were reportedly ignored

Amnesty International has called on the Iranian authorities to halt the execution of a 22-year-old man from the country’s Kurdish minority who is due to be hanged after an unfair trial on Thursday.

Ramin Hossein Panahi was sentenced to death in January for “taking up arms against the state” after a grossly unfair trial and amid serious torture allegations.

His conviction was based upon his membership of the armed Kurdish opposition group Komala, but no evidence linking him to activities involving intentional killing - the required threshold under international law for imposing the death penalty - was presented at his trial.

“Ramin Hossein Panahi’s case has been a breath-taking miscarriage of justice from start to finish.

“After appearing at his trial reportedly bearing torture marks on his body he was convicted in less than an hour.

“During the investigation period he was denied access to both his lawyer and his family, as well as to any details of the evidence against him.

“In a complete mockery of the judicial process, intelligence officials also repeatedly pressured him to make a televised ‘confession’ in exchange for the quashing of his death sentence. His refusal to submit to this pressure has seen him languishing in solitary confinement.

“We urge the Iranian authorities not to compound this shocking catalogue of human rights violations by proceeding with what is the ultimate and irreversible denial of human rights.

“Ramin Hossein Panahi’s death sentence must be quashed now before it’s too late.”

Iran executed at least 507 people last year and has one of the world's worst records in relation to the death penalty and human rights.

Amnesty opposes the death penalty in all cases without exception regardless of the nature of the crime, the characteristics of the offender, or the method used by the state to kill the prisoner. The death penalty is a violation of the right to life and the ultimate cruel, inhuman and degrading punishment.