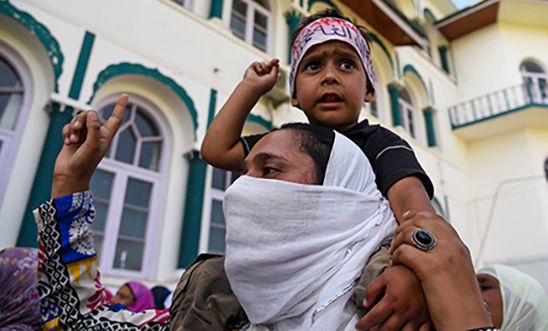 Amnesty International has documented a clear pattern of the Indian authorities arbitrarily detaining activists, politicians and even children if they are thought to hold dissenting opinions, as the crackdown in Jammu and Kashmir continues.

After conducting interviews in Jammu and Kashmir in the last six weeks, Amnesty International India is demanding the immediate release of all detainees held without charge or trial, and a complete lifting of the communication blockade in the region.

While some mobile networks have been restored, internet services remain unavailable in Jammu and Kashmir. Public transport continues to be off the roads, restricting access to the region. The communications blockade is also having an adverse effect on access to health care and freedom of the press in Jammu and Kashmir.

Amnesty has also recorded a pattern of the authorities using excessive force and intimidation. Almost every detained person interviewed by Amnesty described being beaten and threatened, with several of these cases amounting to torture or other cruel, inhuman and degrading treatment.

In most cases of people detained, lawyers and family members of the detainees are not informed of the grounds of arrests and the whereabouts of their clients and relatives. Refusal to share critical information with the detainees’ family members and lawyer constitutes a serious violation of the detainees’ right to a fair trial. It effectively prevents them from seeking an independent judicial review of the lawfulness of their detention.

“The cases documented by Amnesty International India clearly show the government’s witch-hunt to curb dissenting voices in Kashmir, including those of duly-elected leaders.

“An atmosphere of fear and reprisal has ensured silence from many quarters. This has been compounded through arbitrary detentions.”

Amnesty India interviewed 21 people in the region, including those detained and their lawyers, medical professionals, local journalists and political leaders.