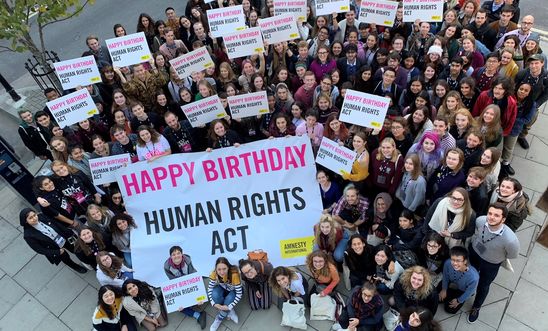 The Human Rights Act has been absolutely key to the big justice fights of the last 20 years Amnesty said today, on the 20th anniversary of the act receiving Royal Assent, as the organisation published a list of 20 cases involving the act.

The Human Rights Act is the principal law protecting human rights in the UK. It incorporates into UK law 16 rights from the European Convention of Human Rights – the treaty drafted after the Second World War as part of the promise of ‘never again’. From then on, countries were committed to respect, protect and fulfil people’s fundamental rights in domestic courts in the UK.

Previous to the act being passed, people in the UK had access to their rights only through the Convention and were often required to go to the European Court of Human Rights in Strasbourg to enforce them. Now those rights are part of UK law.

Despite the clear benefits for human rights in the UK of the legislation, there have been repeated threats to remove or repeal the act by successive politicians.

“From Hillsborough to the Mid-Staffs hospital scandal, the Human Rights Act has been absolutely key to the big justice fights of the last 20 years.

“It’s the unsung hero of UK life, holding powerful people and institutions to account when ordinary people are let down.

“We should celebrate the way the act defends all of us - especially the most vulnerable - and resist any attempts to dilute or remove those protections.”

The following cases all involve the Human Rights Act, or – in the case of the last two - could very likely in the future result in cases which are brought under the act:

Two of the most high-profile rights cases over the last year have also raised issues which the Human Rights Act sheds important light on: