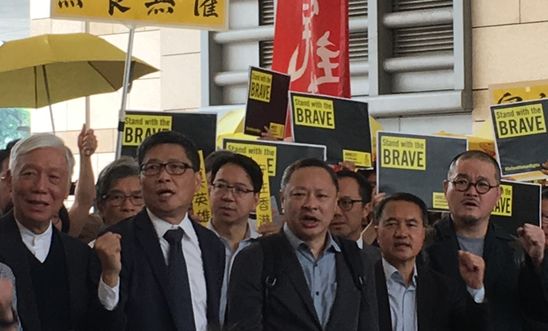 Four leaders of Hong Kong’s pro-democracy Umbrella Movement protests jailed today for their role in the 2014 peaceful protests must be immediately and unconditionally set free and have their convictions overturned, Amnesty International said today.

The pro-democracy activists were given jail terms ranging from eight to 16 months in prison at West Kowloon Magistrates’ Courts.

Among the eight protesters sentenced were the co-founders of the “Occupy Central” campaign – legal scholar Professor Benny Tai Yiu-ting and sociologist Professor Chan Kin-man, who each received 16 months’ imprisonment. The other two activists jailed are political party leader Raphael Wong and lawmaker Shiu Ka-chun, each sentenced to eight months’ imprisonment.

“Today’s appalling jail sentences against four pro-democracy activists are an affront to justice and the human rights to peaceful protest and freedom of expression.

“All four are prisoners of conscience imprisoned solely for peacefully advocating for democracy for Hong Kong, and they must be immediately and unconditionally released and have their sentences overturned.

“Under international law, the Hong Kong government has no right to detain these people. These detainees have been sentenced to prison because of their beliefs, not for any crime they have committed.

“The vindictive use of these vague and ambiguous charges by the Hong Kong government sets a dangerous precedent that could lead to the blanket prosecution and imprisonment of peaceful protesters. The government must stop abusing the law and the judicial system to silence debate on democracy in Hong Kong.”

In the case of the nine protesters, prosecutors decided to base the charges on the common-law offence of “public nuisance”, which allows for harsher sentences compared to similar charges under statutory law.

The conviction and sentencing for “incitement” and “incitement to incite” have long-term negative impacts on the enjoyment of the freedoms of expression and peaceful assembly in Hong Kong. In this case, evidence of “incitement” included newspaper articles directed to the public at large; press conference statements and media interviews that happened months before the protests; and videos taken by the police of protest leaders using loudspeakers to urge participants to invite others to join the protests.

All nine protesters indicated they will appeal against the conviction.

For 79 days between September and December 2014, more than 1 million people occupied major streets across Hong Kong to call for democracy in the city.

The Hong Kong government’s prosecution of the nine Umbrella Movement protest leaders follows the conviction of three student leaders in2017. More than four years on from the start of the movement, hundreds of protesters remain in legal limbo, uncertain if the police will proceed with charges against them.

In a briefing published ahead of the November 2018 trial of the nine activists sentenced today, Amnesty International outlined why the prosecution amounts to an attack on the human rights to freedom of expression and peaceful assembly.