Hong Kong: 'Horrifying' police violence against protesters must be investigated 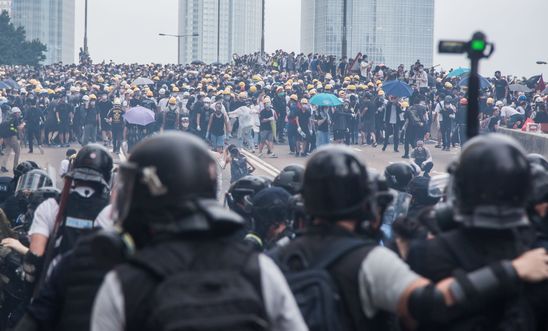 In response to the latest clashes between police and protesters in Hong Kong on Saturday night – which included police storming the platform of Prince Edward metro station and beating people on a train - Man-kei Tam, Director of Amnesty International Hong Kong, said:

“Violence directed at police on Saturday is no excuse for officers to go on the rampage elsewhere. The horrifying scenes at Prince Edward metro station, which saw terrified bystanders caught up in the melee, fell far short of international policing standards.

“Video footage shows police stormed the train carriage and used batons to repeatedly beat people posing no threat whatsoever. Pepper spray was used in a carriage where people had no means to retreat, while medics were barred from entering the station. It is also alarming that a police officer appeared to aim a sponge grenade launcher at close range to those inside the train. Such unlawful police tactics continue to inflame rather than deescalate the situation.

“There are also serious questions surrounding the deployment of undercover officers among the protesters and whether they played any role in inciting violence. Such officers should never act as agents provocateurs. It creates mistrust and suspicion, and sows divisions among people who have the right to assemble and associate.

“For the first time, police used a blue dye in water cannons, which can result in large numbers of people, including bystanders and journalists, being indiscriminately marked. These tactics pose a real threat to the freedoms of expression, peaceful assembly and the right to a fair trial. The police operation on Saturday only underscores the urgent need for an independent and proper investigation into the policing of the protests.”