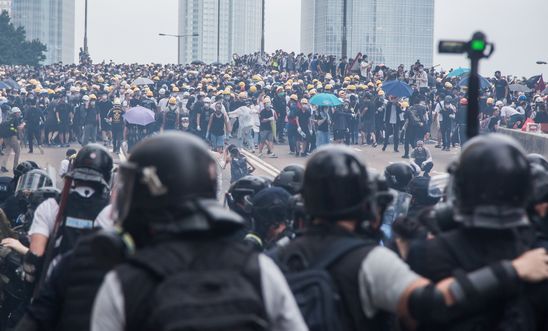 The authorities’ attempt to introduce the controversial Extradition Bill in Hong Kong was part of a steady erosion of human rights in the region, Amnesty International said today, in a new report detailing the creeping influence of Beijing’s repressive policies.

The 46-page report, Beijing’s Red Line in Hong Kong, highlights how increasing restrictions on the rights to freedom of expression, association and peaceful assembly culminated in this summer’s mass protests.

The Chinese authorities’ hard-line rhetoric on “national security” has also resulted in a growing number of local activists and journalists being censored, prosecuted and harassed.

Along with increasingly heavy-handed policing tactics and police inaction to protect protesters from violence by others, the Hong Kong authorities have misused laws and regulations to harass and prosecute individuals and groups accused of crossing Beijing’s ‘red line’.

Amnesty’s report - based on interviews with journalists, activists, academics, students, NGO workers and lawmakers - details how the Hong Kong authorities, taking their lead from Beijing, have been implementing increasingly repressive policies since the 2014 Umbrella Movement protests.

The rights to freedom of expression and association have repeatedly come under attack, with more than 100 people prosecuted for peaceful activism since 2014.

“The steady erosion of rights and freedoms in Hong Kong began long before the announcement of the Extradition Bill.

“The Chinese authorities, in tandem with the Hong Kong leadership, have for years been chipping away at the special status that Hong Kong is supposed to enjoy regarding the protection of human rights.

“The outrageous police response to the Extradition Bill protests has heightened fears that Hong Kong is sliding into the repressive style of rule seen in mainland China.

“We are urging the Hong Kong authorities to listen to the demands of millions of protesters and protect their right to peaceful assembly, in line with international and domestic obligations. Ordering an independent and effective investigation into police actions would be a vital first step.”

Amnesty’s report explains the period between two high-profile protests: Occupy Central and the Umbrella Movement in 2014, and the Extradition Bill protests that started in June this year. It sets out how the Chinese authorities have used their vague and all-encompassing definition of “national security” – which has been employed to devastating effect against activists and others in China – to target journalists, activists and government critics in Hong Kong.

In 2017, China’s President Xi Jinping set out a “red line” on Hong Kong aimed at “any attempt to endanger China’s sovereignty or security, challenge the power of the Chinese government, or use Hong Kong to carry out infiltration and sabotage activities against the mainland”. The Chinese authorities have increasingly interpreted the ordinary exercise of rights as crossing this ‘red line’. The Hong Kong government has adopted these tactics, breaching the tenets of its international human rights obligations and Hong Kong’s Basic Law.

Many of those Amnesty interviewed said their peaceful advocacy for human rights and democracy had made them targets of the Hong Kong and Beijing authorities.

One journalist said he received weekly calls from Beijing government officials pressuring him to play down criticism of President Jinping and issues like Taiwanese independence. Meanwhile, NGO workers said they had been repeatedly harassed by Hong Kong and Beijing officials and forced to self-censor in order to protect their funding.

Lack of accountability for unlawful use of force by police during protests also emerged as a key concern for the activists Amnesty interviewed. One activist who was beaten up by police during a 2014 protest told Amnesty: “It is useless to complain about the police. The success rate of accusing police of assault is almost zero.”

During the recent protests, sparked by the Extradition Bill proposal, Amnesty documented repeated instances of police using unnecessary and excessive force in violation of international law and standards.

Following the announcement of the withdrawal of the Extradition Bill on 4 September, Amnesty has repeatedly called on the Hong Kong authorities to thoroughly and independently investigate the inappropriate use of force or other abuse by police during the protests, as well as to stop using politically-motivated prosecutions against peaceful protesters.

The Hong Kong authorities must also demonstrate their commitment to respecting, protecting and fulfilling the rights to freedom of expression, association and peaceful assembly by lifting undue restrictions on these rights under the guise of ‘national security’.

“For the millions who took to Hong Kong’s streets this summer, the Extradition Bill is just the tip of the iceberg when it comes to Beijing’s assault on their human rights.

“The authorities need to show they are willing to protect human rights in Hong Kong - even if this means pushing back against Beijing’s ‘red line’.”