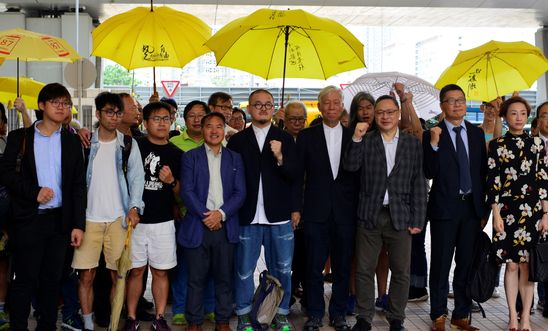 Tanya Chan (first on the right) and the Umbrella Nine.

“Tanya Chan’s conviction and sentence are grossly unjust and should be overturned. She, like all the Umbrella Nine, was prosecuted solely for peacefully advocating for democracy in Hong Kong.

“This is the latest dark chapter in the curtailing of the right to freedom of expression and peaceful assembly in Hong Kong.

“All of the convictions against the Umbrella Nine should be quashed, and the four activists currently in jail must be immediately and unconditionally released.

“The government must stop abusing the law and the judicial system to criminalise peaceful protesters, and silence debate on democracy and other views Beijing deems problematic in Hong Kong.”

Tanya Chan is the last of the Umbrella Nine leaders of the 2014 pro-democracy protests to be sentenced. Her eight-month prison term is suspended for two years. Her sentencing had been adjourned so she could undergo surgery for a life-threatening condition, for which she is still receiving medical treatment.

On 9 April, Tanya Chan and eight other activists were convicted of vague “public nuisance”-related charges for using a loudspeaker to urge participants to join the 2014 protests, which the government accused of obstructing public places and roads.

On 24 April, four of the Umbrella Nine leaders were given jail terms ranging from eight to 16 months. Legal scholar Professor Benny Tai Yiu-ting and sociologist Professor Chan Kin-man were jailed for 16 months. Political party leader Raphael Wong and lawmaker Shiu Ka-chun were sentenced to eight months in jail. Others were given suspended sentences or ordered to carry out community service. All filed appeals against their convictions.

In a briefing published ahead of the November 2018 trial of the nine activist, Amnesty outlined why the prosecution amounts to an attack on the human rights to freedom of expression and peaceful assembly.