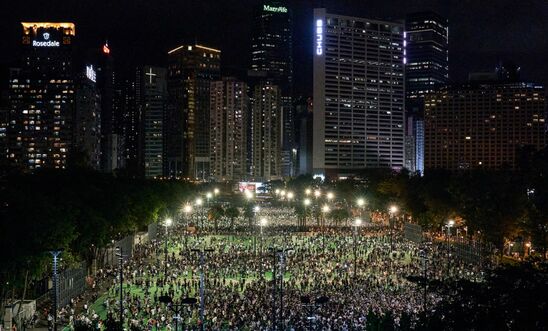 Responding to the disbandment of the Hong Kong Alliance in Support of Patriotic Democratic Movements of China (Hong Kong Alliance), which has organised Hong Kong’s Tiananmen commemoration vigil for the past 30 years, Yamini Mishra, Amnesty International’s Asia-Pacific Director, said:

“For 32 years, the Chinese government has sought to censor all mention of the Tiananmen crackdown on the mainland. The effectively forced disbandment of the Hong Kong Alliance is the latest signal that authorities in Hong Kong are keen to do the same.

“The candlelight vigil organised by the Hong Kong Alliance has inspired generations of Hongkongers to denounce the horrific events of 4 June 1989. While the Beijing authorities punished those in the mainland who sought justice for Tiananmen victims, the Alliance tirelessly archived evidence of what really happened.

“But the pressure exerted on the group in the lead-up to its disbandment, including arrests of some of its leaders on various charges and a police investigation into its peaceful activities, show that such June Fourth-related activism will no longer be tolerated.

“After the recent demise of some of Hong Kong’s largest unions and the group organising some of the city’s largest protests, it is clear the Hong Kong government is targeting civil society groups with broad support and the capacity to mobilise. Worryingly, the government’s crackdown on such organisations seems likely to continue.

“Without the Hong Kong Alliance, the future of the Hong Kong’s June Fourth vigil seems bleak. But the large numbers of people who chose to publicly remember Tiananmen for the past two years, despite the vigils being banned, shows that Hongkongers will not be forced to forget this dark chapter in China’s past.”

For three decades, the Hong Kong Alliance organised the world’s biggest commemoration of the Tiananmen crackdown, when hundreds – possibly thousands – of people were killed in Beijing on the evening of 3/4 June 1989 when troops opened fire on students and workers who had been peacefully calling for political and economic reforms, as well as an end to corruption.

Every year on 4 June since 1990, tens and sometimes hundreds of thousands of people joined a candlelight vigil in Hong Kong’s Victoria Park to remember those killed. They called on the Chinese authorities to reveal the truth about what happened, and take accountability for the fatalities. For the past two years, the vigil was banned on Covid-19 grounds.

The Hong Kong Alliance announced its decision to disband today (25 September) after coming under increasing pressure since the enactment of Hong Kong’s national security law in June 2020.

Last month, the group received a letter from the Hong Kong police’s national security unit accusing it of “collusion with foreign forces” and requesting information about its membership, finances and activities.

The Hong Kong Alliance is the latest organisation to fold in the city, following the recent disbandment of two other civic groups who were being targeted either by the authorities or pro-Beijing media.

The Civil Human Rights Front, the umbrella group behind many of Hong Kong’s largest protests, disbanded on 13 August. Three days earlier, the Hong Kong Professional Teachers’ Union said it was breaking up after the government ceased working with it and police warned of further action.

Earlier this week, the Hong Kong Confederation of Trade Unions said it will also disband due to threats to the safety of its members.