Honduras: Half-truths for Berta Cáceres and her family 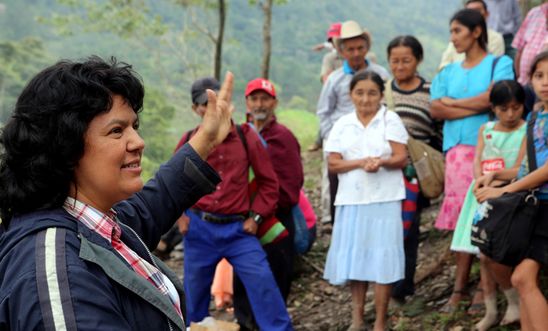 Seven men have been found guilty of the murder of Honduran indigenous and environmental human rights defender Berta Cáceres.

In response to the verdict handed down on Thursday, Erika Guevara-Rosas, Amnesty International’s Americas Director, said:

“By excluding the victims from the murder trial of human rights defender Berta Cáceres and by having the Public Prosecutor’s Office – an institution that has repeatedly been reported for violating their rights – act as their representative, the path to justice and truth has been blocked for the defender’s family.

“Despite the ruling delivered today in this emblematic case, the Honduran justice system must demonstrate its commitment to the truth and identify all those who planned and ordered the murder of Berta Cáceres.”

Last night, the trial against the eight individuals accused of the murder of the Indigenous Lenca leader and environmental defender concluded at the National Criminal Court.

Douglas Bustillo (a retired military officer), Henry Hernández (a former soldier), Edilson Duarte Meza, Óscar Torres, Sergio Rodríguez Orellana (a director for DESA, the company that built the Agua Zarca dam to which the activist was opposed) and Mariano Díaz Chávez (an army major) were all found guilty of killing Cáceres on 2 March 2016. Emerson Duarte Meza was found not guilty.

Irregularities during the proceedings

Throughout the investigation, the family of the human rights defender and Gustavo Castro, the only person to have witnessed the killing, have reiterated that the Honduran Public Prosecutor’s Office failed to ensure genuine and full access to the case file and the evidence.

As the court did not take the appropriate measures to ensure the victims had access to the evidence and the case file, the representatives of Berta Cáceres’ family and Gustavo Castro filed a motion to recuse the members of the court, deeming them to lack the impartiality required to hear and rule on the case. This petition prompted the suspension of the trial, which had been scheduled to begin on 17 September.

The court reconvened to commence the trial on 19 October. The lawyers for Berta Cáceres’ family and Gustavo Castro did not appear in court on the grounds that starting the trial would be illegal, given that the ruling on the writ of amparo was still pending.

On that same date, the court declared the trial to have been abandoned by Berta Cáceres’ family and Gustavo Castro. The court decided that the Public Prosecutor’s Office should assume representation of the human rights defender’s family and the aforementioned witness.

The court’s decision to force the victims to be represented by Public Prosecutor’s Office violates the guarantee of due process and thereby affects the victims’ right of access to justice, to the truth and to reparation. Representation of the victims should not have been left to an institution that they had repeatedly reported for infringing their rights.

Stigmatisation and possible acts of discrimination

As the trial progressed, the Civic Council of Popular and Indigenous Organisations of Honduras and the Broad Movement for Dignity and Justice, the organisation to which the lawyers for Berta Cáceres’ family belong, were the focus of smear campaigns that sought to discredit their work with human rights. The authorities neither refuted these accusations nor advocated the importance of defending human rights in order to protect the members of the abovementioned organisations from further attacks.

According to the Civic Council of Popular and Indigenous Organisations of Honduras, on 31 August 2018, court staff forced Indigenous attendees to remove their traditional clothing before entering the courtroom and refused entry to some Indigenous attendees because there weren’t enough seats. In contrast, delegates from the diplomatic corps of various embassies were allowed to enter and extra seats were provided for them.