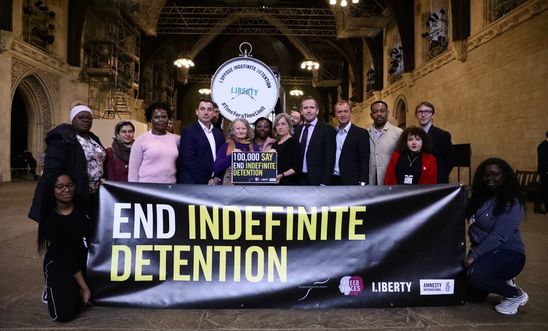 “Detention is another form of torture. You think you’ve escaped it in your home country but then you get here and you go to more” – Adele, former Yarl’s Wood detainee

The UK must end its unacceptable and inhumane practice of indefinitely detaining people in immigration removal centres and radically reduce the number of people it locks up, Amnesty International, Liberty, Women for Refugee Women and Freed Voices said today.

The four campaign groups today handed in a 100,000-signature petition to the Home Office, coordinated by Liberty, Amnesty International UK and the Asylum Justice Project, for an immediate end to indefinite detention.

Ahead of the hand in, MPs Harriet Harman, Andrew Mitchell, Tim Farron, Stuart McDonald and other senior MPs from across Westminster were photographed together in Parliament to show their support for the campaign.

“The voices calling for an end to indefinite immigration detention grow stronger every day, both inside and outside of Parliament. Yet the Government is still locking up tens of thousands of people without telling them how long they will be held or when they will be released.

“People’s lives are being wasted, communities damaged and families separated in the name of this costly, failing system. We need urgent action, a move to more effective and humane alternatives and a time limit on detention at the earliest opportunity.”

“Today thousands of people showed their outrage at the wide, excessive and routine use of detention in our country.

“The message is clear - the UK’s immigration detention system is in urgent need of fundamental change and it’s high time for Parliament to step in and legislate.

“There have been enough promises and reviews from the Home Office. It is now time for the government to ensure that women who have already been through human rights abuses are not exposed to further trauma by being detained. It is time to end the detention of vulnerable women at Yarl’s Wood and move away from detention altogether.”

"It is time for radical detention reform, the introduction of a 28-day time limit, and a great reduction of the UK's detention estate by implementing alternatives to detention.

Miguel*, who had been held in detention for two and half years before being released, told Amnesty International:

“At times I felt so bad, to be honest I thought to myself I’ll just give up. But then, if I didn’t have my son I probably would have ended up committing suicide, killing myself, which I did try, I did try committing suicide on three occasions. Because, I had no hope you know.”

Women for Refugee Women received testimonies from ex-detainees at Yarl’s Wood detention centre, all of whom are survivors of sexual or gender-based violence.

Adele said: “Detention is another form of torture. You think you’ve escaped it in your home country but then you get here and you go to more.”

Jane said: “I am traumatised by the memory of Yarl’s Wood. It was such a horrible experience and even though I left about six months ago I still have nightmares about being taken back. It’s like you are haunted by Yarl’s Wood.”

Gabby said: “I feel angry that the Home Office has said that they aren’t going to detain women who have been raped and trafficked, but then don’t even try to find out about what women have been through before they lock them up.”

Call for reforms to the immigration detention system

In addition to an immediate end to indefinite immigration detention, Amnesty, Liberty, Women for Refugee Women and Freed Voices are calling for reforms including:

- Liberty, also known as the National Council for Civil Liberties, campaigns for civil liberties and human rights in the UK.

- Women for Refugee Women is a grass-roots organisation dedicated to challenging the the injustices experienced by women who seek asylum in the UK.

- *Names have been changed for confidentiality reasons

- The petition handed in to the Home Office was made up of 100,000 signatures gathered from separate petitions by Amnesty and Liberty.