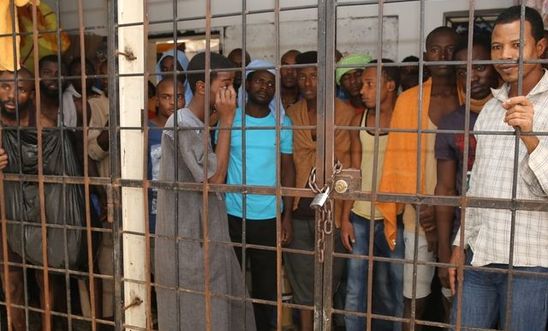 Refugees in a makeshift detention centre in the outskirts of Misrata, Libya © Adem Demir/Anadolu Agency

The Committee’s call for an EU deal with Libya to tackle people smuggling is very dangerous and fails to address the absence of any effective Government with which to deal.

“The Committee’s call for an EU deal with Libya to tackle people smuggling is very dangerous and fails to address the absence of any effective Government with which to deal.

“It is absolutely vital that EU member states do not perpetuate the horrific human rights abuses from which refugees and migrants in Libya are so desperate to escape, by striking unsafe deals with a country itself plagued by widespread lawlessness.”

The Committee’s report says that the EU’s March agreement with Turkey is “arguably a first step towards a meaningful response” but also admits that it is “highly controversial”.

“The EU-Turkey deal is on the verge of collapse and meanwhile thousands of refugees are stuck in limbo in horrendous conditions waiting for their cases to be dealt with.”

Steve Symonds said: “The Committee reiterates its support for the UK Government’s commitment to receive 20,000 Syrian refugees by 2010, but this is too low and too slow. It’s  far wide of the mark as an effective response to the huge scale of the Syrian refugee crisis.”

“The Committee shares the Archbishop of Canterbury’s view that the UK has the capacity to fulfil its moral obligation to accept more refugees fleeing war zones and catastrophes, yet there’s little in the report pushing the UK Government to fulfil these obligations.

“We need a humane, managed and safe response to the movement of people to and within Europe – most of whom are fleeing war and persecution.”

Amnesty strongly welcomes the Committee’s recognition of the need for more safe and legal routes for refugees who are seeking safety in Europe, as well as the request for the Government to immediately accept 157 unaccompanied children from Calais into the UK.

Steve Symonds said: “It is absolutely vital that we reduce the pressures on refugees to attempt dangerous journeys in the hands of ruthless smugglers in the hope of reuniting with their loved ones. It is right and commendable that the UK Government immediately accepts 157 unaccompanied children from Calais, but this important recommendation doesn’t address the wider problem.”

Amnesty also commends the Committee’s recognition of the hugely disproportionate responsibility falling on frontline European states like Greece and Italy as a result of the EU Dublin arrangements which prioritise the country of entry to the EU as the place responsible for most asylum claims.

Mr Symonds added: “This is neither fair nor sustainable and has proved particularly disastrous over the course of last year.”

“We welcome the Committee’s commitment to tackling the refugee crisis, but we have to see the UK Government taking more leadership and responsibility. Despite being one of the richest countries in the world, the UK hosts less than 1 percent of the world’s refugees and that is just not good enough. There is an ideal opportunity for the UK to demonstrate this leadership at the UN Summit on refugees in September and we hope that the Government finally rises to its responsibilities.”