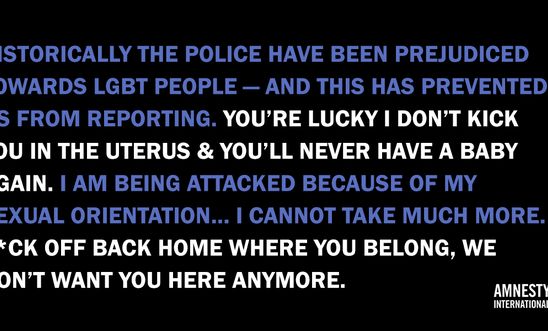 Amnesty International is today calling for improved training for police into how to deal with hate crime and for a review of the hate crime legal framework as it publishes a new briefing ‘Against Hate: Tackling hate crime in the UK’.

The briefing, produced following a study by the University of Leicester, is a review of existing legislation and case studies from victims of hate crime, and is being published on the one-year anniversary of the European Union Referendum vote.

It highlights a 42 per cent rise in hate crime in the two weeks either side of last year’s referendum, mainly against members of minority ethnic and faith communities, new migrants, asylum seekers and refugees.

The research showed that many hate crime victims are not reporting abuse, and the training of police officers across the country is inconsistent, leaving some ill-prepared in identifying and investigating cases, and therefore leading to a low conviction rate.

“The rise of hate crime in the UK is of significant concern for a number of reasons – and the time is now to put a stop to it. This is a problem that is both under-reported and under-resourced.

“Every year hundreds of thousands of people in the United Kingdom are attacked and harassed – physically or verbally – because they are perceived as ‘different’.

“All people of all identities should be able to go about their lives in peace, without the fear of being abused or harassed by those who seek to sow hatred and division.

“In recent weeks, attacks in London and Manchester have attempted to undermine the very fabric of our society. In their wake, we have seen reports of a rise in demonising language and dangerous comments that can cause real harm to real people. Now, more than ever, we must stand together against this hatred.

“We are now calling for police to receive increased training in how to respond to hate crime and support victims, for more resources to assist investigation and prosecution, and for more awareness in how victims can report hate crimes.”

The study also highlighted that between 2012 and 2015, only 52 per cent of hate crime victims in England and Wales were satisfied with the police response in terms of fairness and effectiveness, much lower when compared to 73 per cent of general crime victims.

“We have had concerns for some time that toxic rhetoric from prominent figures can have serious consequences on the streets of Britain.

“Last summer, there was a worrying use of divisive language that demonised sections of the population and sent the harmful message that some people are more entitled to human rights than others.

“The language used by politicians, social commentators and sections of the media can have very real consequences for people, and we are reminding them of the need to be careful with what they say and what they do in this ongoing era of political upheaval.”

At Amnesty’s AGM earlier this year, Brendan Cox, husband of murdered MP Jo Cox, said: “The threat of rising far-right extremism is real and it isn’t going to go away quickly. But with resolution, a concerted attempt to reach out and a focus on building closer communities we can and we will defeat it.”

Following the publication of the briefing, Amnesty is calling for: