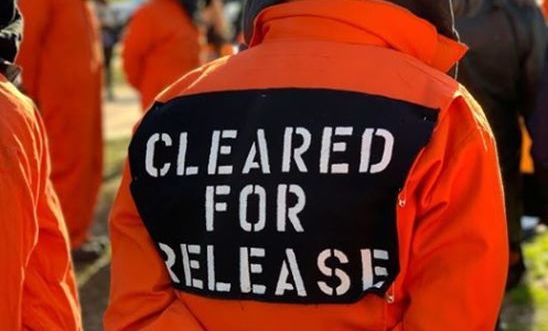 Amnesty International USA and a dozen other human rights organisations will stage a protest outside the White House in Washington DC tomorrow on the 18th anniversary of detainees first being taken to the notorious US military detention centre at Guantánamo Bay in 2002.

After a rally in Lafayette Park, activists wearing orange jumpsuits and black hoods will march in a symbolic funeral procession from the White House to the city’s Trump Hotel (event will begin at 1pm ET and end at 3pm: Facebook invitation details here).

Nine coffins will be carried on the procession to draw attention to the nine detainees who have died at the detention centre.

Guantánamo - which remains open indefinitely after an executive order signed by President Trump - currently holds 40 men. Several detainees are experiencing serious health problems as a result of years of detention, as well as torture and other ill-treatment.

Some of the Guantánamo detainees have long since been cleared for transfer to other locations, including the Saudi Arabian national Toffiq al-Bihani, who has been held without trial for eight years. Amnesty USA has been calling for al-Bihani’s release and at tomorrow’s event activists will distribute appeals about his case to members of the public, encouraging them to send these to the US Defense Department.

Daphne Eviatar, Director of Amnesty International USA’s Security With Human Rights programme, who will be speaking at tomorrow’s event, said:

“It is well past time that Guantánamo close once and for all, and all the men who have long ago been cleared for release are transferred to countries that have agreed to accept them.”