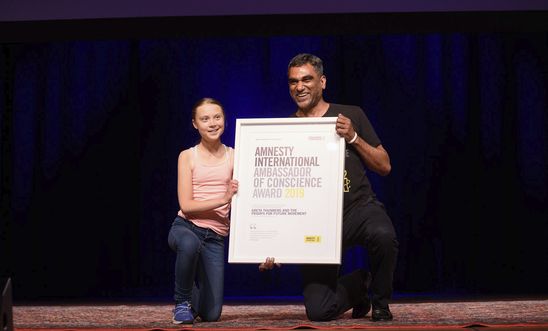 ‘No one is too small to make a difference’ - Greta Thunberg

Photos and b-roll of the awards ceremony available

Climate activist Greta Thunberg gave an impassioned appeal as she accepted the Amnesty International Ambassador of Conscience award at a ceremony in Washington last night.

In her speech, the 16-year-old Swedish activist– who has inspired young people around the world to strike in protest of inadequate government action on the crisis - spoke about the importance of mass global action and urged people to take part in the global climate strikes planned for September 20th and September 27th.

“This award is for all of those millions of people, young people, around the world who together make up the movement called Fridays for Future. All these fearless youth, fighting for their future. A future they should be able to take for granted. But as it looks now, they cannot.

“Activism works. So, what I’m telling you to do now, is to act. Because no one is too small to make a difference. I’m urging all of you to take part in the global climate strikes on September 20th and September 27th. See you on the streets.”

Amnesty International’s Ambassador of Conscience award celebrates people who have shown unique leadership and courage in standing up for human rights – people who have acted with their conscience and used their talents to inspire others.

Amnesty awarded Greta the 2019 Ambassador of Conscience title because of her outstanding contribution towards raising awareness of the climate crisis. Her decision to protest outside the Swedish parliament every Friday – starting in August 2018 and lasting until the government took more serious action to tackle the climate emergency - kicked off the Fridays for Future movement. This movement has since mobilised more than one million young people from all over the world.

The award was presented to Greta ahead of the UN Climate Action Summit in New York on 23 September, when political, business and civil society leaders are expected to announce plans to ramp up ambition to tackling the climate crisis.

The Peoples' Summit on Climate, Rights and Human Survival – the first ever global summit on human rights and climate change – will be hosted ahead of the UN Climate Action Summit by leading civil society groups and the UN Human Rights Office in New York from 18-19 September. The Summit aims to galvanise the human rights community to urgently scale-up its efforts on climate justice, creating the most diverse movement ever assembled to tackle the climate crisis.

On Friday 20 and 27 September, youth activists from 115 countries will stage climate protests around the world - with more than 2,400 events planned in 1,000 cities.

“Millions of people are already suffering the catastrophic effects of disasters whose impacts have been made far worse by climate change. It is young people like Greta and those involved in the Fridays for Future school climate strike movement who are proving that it is possible to change our ways.

“These young leaders have laid down the challenge. In an apathetic world drifting towards calamity, they have stood up as our collective conscience and said, ‘enough is enough’.

“They have demanded that we stop ignoring the magnitude of the crisis and stop making excuses, and instead start mobilising. Now it’s time for every single one of us to follow them. A mass movement is needed if we want to force governments and corporations into long-overdue action.”

Nelson Mandela among past Ambassador of Conscience awardees

Amnesty’s Ambassador of Conscience award was founded in 2002 to celebrate individuals and groups who have furthered the cause of human rights through acts of conscience, confronting injustice and using their talents to inspire others. The award was inspired by the poem From the Republic of Conscience, written for Amnesty International by the late Irish poet Seamus Heaney. Past awardees include Nelson Mandela, Malala Yousafzai, Ai Weiwei, Harry Belafonte, Joan Baez and Colin Kaepernick.

Thank you everyone. I am so honoured to be in this room with so many amazing people. Please give yourself an applause.

This award is for all of those millions of people, young people, around the world who together make up the movement called Fridays for Future. All these fearless youth, fighting for their future. A future they should be able to take for granted.

But as it looks now, they cannot.

With our business as usual, we are currently on track for a world that could displace billions of people from their homes, taking away even the most basic living conditions for countless of people. Making areas of the world uninhabitable for humans.

The fact that this will create huge conflict and unspoken suffering is far from a secret. And yet, the link between the climate and ecological emergency, mass migration, famine, violations of human rights and war is still not clear to many people.

The changes and the politics required to take on the crisis simply doesn’t exist today.

That is why every single one of us must push from every possible angle, to hold those responsible and accountable and to make the people in power act and to take the measures required.

We are fighting for everyone. For you. For the people living in areas of the world that are already suffering the consequences from the first stages of the climate and ecological emergency.

People who breathe toxic air, who drink contaminated water, who have to flee their homes because of climate and environmental-related disasters.

Indigenous communities whose lands and waters are being destroyed. People whose food and water supply is being threatened by environmental-related catastrophes, stronger and more frequent droughts, rainfalls, storms, or melting glaciers. Whole nations are now literally being left in ruins or disappearing underneath rising sea levels.

People are dying. And yet, so many of us keep looking away.

The world has never seen a threat to human rights of this scope. So said by the UN Rights chief, Michelle Bachelet, recently during the UN Human Rights council in Geneva, referring to the climate crisis.

She said, the economies of all nations, the institutional, political, social, and cultural fabric of every state, and the rights of all our people and future generations will be impacted.

This is exactly the clarity we need now from governments and the people in power.

Right now, the world’s emissions of greenhouse gasses keep rising rapidly. The destruction of natural habitats are continued at horrendous speed despite all of the beautiful words and promises from our leaders.

We are still moving in the wrong direction with unimaginable pace. It may seem impossible to pull the emergency break, and yet that is what we have to do.

But right now, I think there is an awakening going on. Even though it is slow, the pace is picking up and the debate is shifting.

This is thanks to a lot of different reasons, but it is a lot because of countless of activists and especially young activists.

So, what I’m telling you to do now, is to act. Because no one is too small to make a difference.

I’m urging all of you to take part in the global climate strikes on September 20th and September 27th.

And just one last thing...see you on the streets.