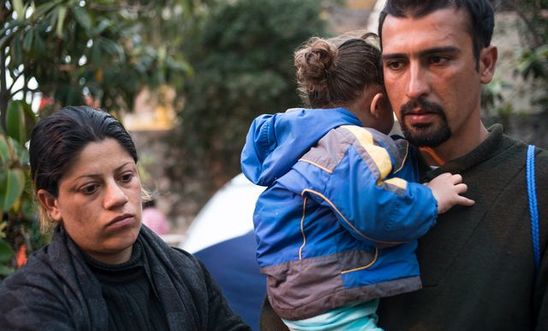 Thousands of refugees and migrants are being held arbitrarily in appalling conditions amid growing uncertainty, fear and despair over their fate under the new EU-Turkey refugee deal, Amnesty International said, after obtaining access to two highly restricted detention centres on the Greek islands of Lesvos and Chios.

On 5 and 6 April, an Amnesty research team was granted access to two closed detention centres, Moria on Lesvos and VIAL on Chios. A total of around 4,200 people are currently detained at the two sites. Most arrived on the Greek islands after the EU-Turkey deal took effect on 20 March. Some of them have been detained for more than a fortnight.

Among the 89 refugees and migrants Amnesty’s team interviewed, there were a large number of particularly vulnerable people, including pregnant women, babies, small children and people with disabilities, trauma and serious illnesses.

“Refugees are trapped here with no light at the end of the tunnel. A setup that is so flawed, rushed and ill-prepared is ripe for mistakes, trampling the rights and well-being of some of the most vulnerable people.

“People detained on Lesvos and Chios have virtually no access to legal aid, limited access to services and support, and hardly any information about their current status or possible fate. The fear and desperation are palpable.

“No asylum-seeker should be automatically detained, and these detention centres on Lesvos and Chios are not in any way fit for purpose for the many young children, people with disabilities, or people with urgent medical needs we’ve met. They must be released immediately.”

From reception to detention

The decision to move from open reception centres to closed detention camps to hold those who cross the Aegean Sea from Turkey has resulted in thousands of people being arbitrarily detained, in some cases for weeks, while they await news on their asylum applications and future.

In Moria detention centre on Lesvos, Greek army and police exercise strict control over who goes in and out. The camp, which now holds around 3,150 people, is closed off from the outside world by several layers of fencing topped with barbed wire.

“I escaped Syria to avoid jail, but now I am in prison,” a Syrian man in his late 20s told Amnesty inside Moria detention centre.

In VIAL detention centre on Chios, which is built around an abandoned aluminium factory, access is also tightly controlled.

Meanwhile, security concerns linger following fierce clashes that broke out between different nationalities inside the camp overnight on 1 April, prompting more than 400 refugees and migrants to escape.

The majority of those who fled are now sleeping rough in and around the main port in central Chios. There is little security and scant access to basic services there.

Only two of the refugees and migrants Amnesty International spoke to were able to show their detention orders based on their individual circumstances. Automatic, group-based detention is by definition arbitrary and therefore unlawful.

The automatic detention of all those currently arriving on the Greek islands has led to a failure to take the special circumstances and needs of particular asylum-seekers into account. These include torture victims, families with very young children and babies, women travelling alone with children, people with disabilities or in need of immediate health care, pregnant women, and people in need of psychological care. Children should never be placed in immigration detention.

Amnesty saw and spoke to many such individuals in both Moria and VIAL who were in detention even though they clearly should not have been. Authorities in Moria told Amnesty that the identification of those with particular vulnerabilities is a priority and a group of 50 to 100 people has already been released to open centres, but a large number remain inside.

Just some of those Amnesty observed or spoke with in Moria were a small baby with complications after an attack in Syria, heavily pregnant women, people who are unable to walk, and a young girl with a developmental disability.

The first family Amnesty spoke to in VIAL had arrived on 19 March and included a six-year-old Syrian-Palestinian girl whose mother told us the girl had sustained a serious back injury when a roof partially collapsed on her after a bombing. She showed us her swollen back and medical records from Syria.

Key issues people complained about in both Moria and VIAL were the poor quality of food, lack of blankets and privacy, and inadequate access to appropriate medical care.

Many refugees spoke about the lack of access to doctors or other medical staff in both centres. This was especially acute for vulnerable groups in need of highly specialised medical assistance.

An Iraqi family in a small tent with insufficient blankets told Amnesty International how, since arriving in the past week, they have struggled to get help for their eight-year-old daughter who was diagnosed with a hip bone infection in Iraq which is worsening and requires urgent treatment. They showed Amnesty a medical file which they brought twice to a doctor since their arrival but were turned away. The first time, they were told there was no interpreter and the second time they were simply refused access.  “She’s always in pain,” said the mother.

In Moria, only three doctors are typically available to provide medical care for 3,150 people, while at VIAL, teams providing medical care said onsite health services are only available during limited hours, and there are shortages of medicines and other supplies.

Access to food is also restricted. For example, three mothers traveling alone with babies and young children who share a container in VIAL broke down in tears when they described their exasperation at not being able to get the right kind of food or even sufficient milk for their children.

Overcrowding in Moria has also meant there is simply not enough space to house the 3,150 people inside – around 1,000 over capacity. Amnesty observed at least 70 flimsy tents clustered against the perimeter fence and other areas within the camp, where many families and vulnerable people sleep, sometimes five or more to a tiny tent. With people still arriving on the Greek islands in significant numbers, this situation will only deteriorate.

In VIAL, which was just about at capacity with around 1,200 people, several families were packed into tight quarters in fenced-off containers of either 30 or 40 square metres. They have very little outdoor space where they can move freely.

Many people complained about a shortage of blankets, with two or more family members often having to share a single thin blanket during cold nights.

One family of eight people from Syria, including a heavily pregnant woman, her four-year-old son who cannot walk and her ailing father who uses a wheelchair, said that they spent their first two nights in Moria sleeping outdoors with just two blankets between them. They now share several tents as the formal rooms are full beyond capacity.

After the EU-Turkey deal, Greece modified its asylum application process in a law adopted on 1 April. It is evident that the system is not yet up and running, due to a lack of resources and clear guidelines.

Fear and uncertainty around the beginning of the EU-Turkey deal has triggered a spike in asylum applications in Greece. According to the authorities, since 20 March the vast majority out of the 3,150 detained in Moria had expressed their will to apply for asylum while more than 830 people had applied in Chios.

The promised increases in capacity to process these claims, including asylum officers from other EU countries, have yet to arrive in sufficient numbers, resulting in a growing backlog.

On 6 April the asylum service official who is the lone case worker at VIAL told Amnesty the surge in applications is beyond his capacity to process. Out of 833 that had been filed he had processed only ten, one of which was successful. While these cases were still processed under the old Greek asylum process, they indicate the extent of the current staffing shortfalls.

The rushed implementation of the EU-Turkey deal has contributed to glaring failures in the registration and processing of new arrivals.  One important issue that all refugees raised with Amnesty was that they did not receive sufficient information about what the asylum process will entail. This lack of information is even more urgent given that they are detained throughout their application. Many have received no or incomplete documentation of their registration.  For example, a Syrian woman said she and her family signed several documents despite not having an interpreter present, and were not provided with copies. “I don’t need food – I need to know what is happening,” she told Amnesty International.

Many people described being registered late despite having arrived before the 20 March cut-off.  A different Syrian woman who arrived with her family on 19 March was told that they could not register because “the system was not working”.   She showed Amnesty her arrival wristband dated 19 March. Even though they arrived before the entry into force of the EU-Turkey deal, they were actually registered on 21 March and detained. At least three other people demonstrated the same thing.

As the asylum service official in VIAL explained, the new Greek asylum system will have two steps. The first is to assess whether the transit country (Turkey in this case) can be considered a safe third country for that person. Only if it is found not to be, will the applicant’s case be considered on its merits.

The official told Amnesty that it will be up to the individual case workers to determine if Turkey will be deemed a safe third country for people who apply for asylum in Greece. When Amnesty visited VIAL, there were no clear instructions yet regarding what criteria and information will be considered in this process.

With legal aid scarce and inaccessible to the vast majority, and asylum procedures expected to be rushed, it is likely that thousands of asylum seekers will be returned to Turkey despite it being manifestly unsafe for them.

Several refugees described their fear of being sent back to Turkey. A young, pregnant Syrian woman showed Amnesty researchers bruises on her arm where she claims that Turkish border police beat her with a baton; her husband had similar bruises on his leg. They said they were sent back to Syria and when they crossed into Turkey again on 14 March, the Turkish border police shot at them but they managed to escape.

“Europe is turning what should be a path to protection into a nightmare of barbed wire, insecurity and crippling anxiety over the prospect of being sent back to Turkey,’’ said Gauri van Gulik.

“Serious and immediate steps must be taken to address the glaring gaps we’ve documented in Lesvos and Chios. They show that in addition to Turkey not being safe for refugees at the moment, there are also serious flaws on the Greek side of the EU-Turkey deal. Until both are fully resolved, no further returns should take place.”

The Greek and EU authorities must immediately halt mass returns until the following are effectively guaranteed: