Global executions down more than a third, but death sentences at record high - new report 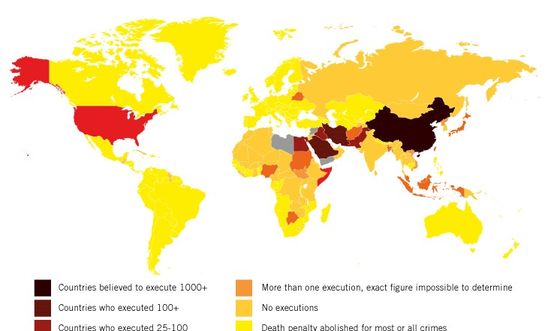 USA carries out lowest number of executions in quarter of century, but eight executions scheduled in Arkansas in 11 days this month

The number of executions around the world last year fell by more than a third compared to the previous year, said Amnesty International today, with 1,032 executions in 23 countries in 2016 compared to 1,634 in 25 countries in 2015. However, though the 37% year-on-year fall was welcomed by Amnesty, the organisation warned that the numbers remain historically high, and 2016 also saw 3,117 people sentenced to death - the highest number of death sentences ever recorded in a single year by the organisation.

The figures - contained in a new 47-page report Death Sentences and Executions in 2016 - do not include China, where thousands are believed to have been executed last year in conditions of great secrecy. Nearly all information on the death penalty in China is considered a “state secret” by the authorities, and previously Amnesty has attempted to estimate China’s execution numbers based on incomplete data. This year, however, Amnesty has instead published the results of an in-depth investigation showing how the Chinese authorities are deliberately obscuring the shocking scale of executions in the country despite repeated official claims that it was making progress towards judicial transparency.

Other notable death penalty developments during 2016 include the fact that the United States carried out its lowest number of executions for 25 years, and that there were significantly fewer executions in Iran (down from 977 in 2015 to 567 last year) and Pakistan (down from 326 in 2015 to 87 last year). Meanwhile, two countries (Benin and Nauru) abolished the death penalty for all crimes last year, while Guinea abolished the death penalty for most crimes. Overall, 141 countries in the world are now “abolitionist” (having either completely abolished capital punishment or effectively no longer using it), while 59 are “retentionist”, of which only a smaller group regularly carry out executions.

Commenting on the figures, Amnesty International UK Director Kate Allen voiced concern that the UK may be toning down its criticism of countries that use the death penalty as it pursues trade deals and entering into new security arrangements. She said:

“We fear that trade and security issues are trumping human rights, with UK officials damping down their objections to the death penalty when it comes to countries like Saudi Arabia or Bahrain.

“When, shockingly, Bahrain executed three men after deeply unfair trials recently, the Foreign Secretary could muster only the mildest of rebukes.

“At its best the UK does some very important work in encouraging countries to end capital punishment, but with death sentences running at record levels around the world now is not the time to go quiet on the issue.

“If governments in Beijing, Manama, Islamabad and Riyadh see there’s very little public outrage over executions, then they're going to think they’ve got a green light to carry on killing.”

China misleading world over how many it executes

A new in-depth investigation by Amnesty, also published today, shows that the Chinese authorities are using an elaborate system of secrecy to obscure the shocking scale of executions in the country, despite repeated claims it is making progress towards judicial transparency. Amnesty’s investigation exposes the fact that hundreds of documented death penalty cases are missing from a national online court database that was initially touted as a “crucial step towards openness” and is regularly heralded as evidence that the country’s judicial system has nothing to hide.

In reality the database contains only a tiny fraction of the thousands of death sentences Amnesty estimates are handed out every year in China. Amnesty found public news reports of at least 931 individuals executed between 2014 and 2016 (only a fraction of the total executions), but only 85 of these appear in the database. The database also omits foreign nationals given death sentences for drug-related crimes, despite media reports of at least 11 executions of foreign nationals. Numerous cases related to “terrorism” and drug-related offences are also absent. China continues to classify most information on the death penalty “state secrets”.

Recently the risk of people being executed for crimes they did not commit has caused increasing alarm among the public in China. In December, the Supreme People’s Court overturned the wrongful conviction of Nie Shubin. He had been executed 21 years earlier, at the age of 20. In 2016, Chinese courts also ruled that four people facing the death penalty were innocent and quashed their death sentences.

In Malaysia and Vietnam, new disclosures reveal that the scale of the executions in those countries is significantly higher than previously thought. Information from Vietnam, published in Vietnamese media for the first time this February, shows that Vietnam has secretly been the world’s third biggest executioner over the last three years, executing 429 people between 6 August 2013 and 30 June 2016 - with only China and Iran judicially killing more people during this time. Vietnam’s Ministry of Public Security does not contain a breakdown of figures for 2016.

Similar secrecy reigns in Malaysia, where parliamentary pressure in 2016 led to revelations that more than a thousand people are on death row, while nine people were executed during the year - far more than previously thought. Meanwhile, the idea that crimes warrant the death penalty continue to take root elsewhere in the region, with the Philippines seeking to reinstate the death penalty (last abolished in 2006) and the Maldives threatening to resume executions after more than 60 years.

Eight executions scheduled in Arkansas in 11 days this month

In the US state of Arkansas the authorities are planning to carry out as many as eight executions this month alone, with two executions per day on 17, 20, 24 and 27 April. The eight men - Bruce Ward (who has been diagnosed with paranoid schizophrenia), Don Davis (identified as having ADHD but denied independent psychiatric assistance at his trial), Stacey Johnson (denied key information regarding a witness’s credibility at his retrial), Ledell Lee (inadequately represented, including by a lawyer “impaired by alcohol abuse”), Jack Jones (diagnosed with bipolar disorder), Marcel Williams (mitigating evidence not heard by the jury), Kenneth Williams and Jason McGehee (mitigating evidence not heard by the jury)

Arkansas hasn’t carried out an execution for 12 years, but its remaining stock of the chemical midazolam (used in lethal injection executions) is reportedly set to expire at the end of April, apparently leading to the scheduled 11-day spate of executions.

For more on the eight Arkansas cases, see: