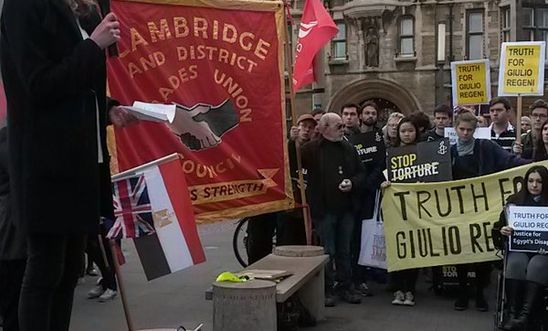 Amnesty International will be raising the case of the murdered Italian student Guilio Regeni during this Sunday’s annual May Day rally in central London.

Regeni, a 28-year-old PhD student at Cambridge University who was in Egypt researching trade unions, went missing in Cairo on 25 January. His badly-mutilated body was found in a ditch on the outskirts of Cairo on 3 February, one of many such discoveries in Egypt recently.

“What happened to Giulio Regeni in Egypt is incredibly chilling and it’s important that trade unionists around the world come out to express their support and solidarity with Giulio’s family and friends.

“We’d really like to see the UK Government stepping up its demands over the case. There’s a widespread feeling that the UK hasn’t made enough of a fuss over this shocking matter.

“The crackdown on trade unionists, journalists and human rights activists in Egypt has got to stop, and one line in the sand is ensuring that Giulio’s killers are brought to justice.”

Scores of people have reportedly been “disappeared” by the security forces under the government of President Abdel Fattah el-Sisi in the past year alone. There are also numerous reports of the torture of those taken into custody by the Egyptian security services, including of students. Torture ranges from beatings, to electric shocks and the use of stress positions. There have also been a series of deaths in custody as a result of torture and a lack of access to urgently-needed medical care.

There have been complaints - including from Cambridge MP Daniel Zeichner - that the UK Government has failed to pursue Giulio Regeni’s case vigorously with the Egyptian authorities.

The UK Government recently responded to a petition calling for it to do more on the case by saying that it had “offered Italy our full support and raised the need for a full and transparent investigation with Egypt”, adding that it was “disappointed by the limited progress made in the case” and “concerned that Italy has not found the cooperation that Egypt has provided to them to be sufficient”.