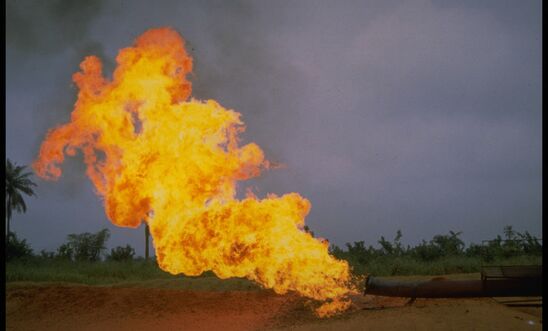 All G7 members have committed to net-zero carbon emissions by 2050, but none have submitted an adequate strategy to reduce emissions by 2030 (library image of oil flare) © Tim Lambon / Greenpeace

The world’s richest governments are condemning billions of people to starvation, drought and displacement through their continued support of the fossil fuel industry, Amnesty International said today.

A new 131-page report - Stop Burning Our Rights! - offers a damning assessment of global failures to protect human rights from climate change and outlines how human rights law can help hold governments and companies to account.

Ahead of the G7 Leaders’ Summit this week (11-13 June), Amnesty highlighted how G7 members are still subsidising the coal, oil and gas industries, and have no credible plans to start phasing out fossil fuels this decade.

All G7 members have committed to net-zero carbon emissions by 2050, but none have submitted an adequate strategy to reduce emissions by 2030 – the year by which global emissions need to be halved in order to avert the worst-case climate scenarios.

“The unambitious climate plans submitted by G7 members represent a violation of the human rights of billions of people. These are not administrative failures, they are a devastating, mass-scale assault on human rights.

“The G7 and other wealthy industrialised countries have historically emitted the most carbon and bear the greatest responsibility for the current climate crisis. They also have the most resources to tackle it - but their strategies to date have been woefully inadequate, and their support for other countries has been stingy.

“At the G7 Leaders’ Summit, governments must commit to unconditionally phasing out all fossil fuels, as close to 2030 as is technically feasible. They must put in place tough regulations requiring businesses to shift to renewable energy and stop using our taxes to subsidise the deadly fossil fuel industry.”

Amnesty is calling on all governments to adopt and implement ambitious national climate plans which reflect their individual levels of responsibility and capacity.

Amnesty’s new report provides an extensive legal and ethical blueprint for what countries and corporations must do to address the climate crisis, help affected people adapt, and ensure remedy for the harm they have caused.

Under international human rights law, all states must do everything in their power to reduce emissions as quickly as possible, but Amnesty’s briefing contains numerous examples of governments failing in this obligation.

For example, of the G20 countries - which collectively account for almost 80% of global greenhouse gas emissions - just seven have submitted targets to reduce emissions by 2030 to the UN.  All of these are currently insufficient to keep the temperature increase below 1.5 degrees.

All states must also ensure a just transition for workers and communities affected by climate change and the decarbonisation process, taking steps to reduce poverty and correct ongoing inequalities in the enjoyment of human rights. This includes prioritising investment in responsibly produced renewable energy and social protection, whilst supporting the creation of new, green and fair jobs.

“Disadvantaged groups must not pay the price for the inaction of wealthy governments and their connivance with the fossil fuel industry.

“There are no shortcuts to saving the planet and humanity. The only option is to rapidly end the fossil fuel era. We can have human rights or fossil fuels – we can’t have both.”