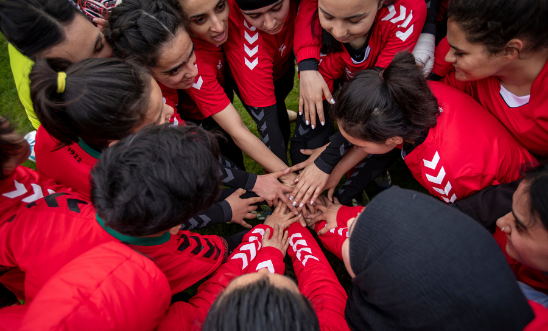 The squad played to victory against a cross-party group of MPs including Tracey Crouch, Kim Leadbeater and Alison McGovern, winning all four games

The game was played to kick-start Amnesty’s annual Football Welcomes initiative, which celebrates the contribution players with a refugee background make to the ‘beautiful game’ and highlights the role football can play in creating more welcoming communities for refugees and people seeking asylum.

This year’s campaign – which is in its fifth year and runs throughout April - comes during the biggest refugee crisis Europe has seen since the Second World War. Images and stories of people fleeing Ukraine have once again shown the plight of refugees, the trauma they face when fleeing conflict, and the need for countries and communities around the world to welcome them.

“The team is a long way from home, but the cheering atmosphere today was what they needed. The players showed off their skills and played passionately. After a tumultuous journey to reach safety, there are still many obstacles they face. Football has a powerful way of bringing people together and is a crucial part of the team rebuilding their lives in the UK.”

“We knew we were playing against pros, and we were up for the challenge. We got to know the Afghan team on the pitch, and they are remarkable players. It’s an absolute pleasure to have them settled in the UK and we can’t wait to watch them grow as a team.”

“This match goes to the very heart of what Football Welcomes is all about - breaking down barriers and bringing people together from different walks of life. The refugee crisis in Ukraine shines a light on the importance of welcoming refugees wherever they're from, whether it’s Ukraine, Afghanistan, Eritrea or elsewhere. We hope as many football teams as possible get involved this year to welcome refugees and show just how important they are to our communities.

Facing the threat of persecution and death for playing football as women, the Afghanistan Development Football Squad fled the Taliban in September last year and finally made it safely to the UK in November.

Since the team’s journey to safety in the UK, they have been transitioning to life and a future in the UK, but it comes with many challenges as the players and their families were forced to flee Afghanistan without any of their possessions.