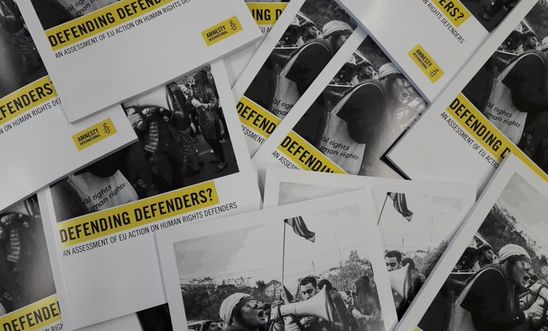 ‘The EU is clearly in a double bind when business or other vital interests are concerned’ – Human rights defender, Memory Bandera Rwampwanyi

The European Union (EU) and its member states are falling short on their commitment to support and protect human rights defenders who are facing mounting deadly threats and attacks, a new Amnesty International report out today shows.

Activists in all countries testified to the difference that EU support can make to their work and lives in the face of spiralling repression. But their testimonies also revealed how a lack of strategy often undermined EU action to support human rights defenders.

In Saudi Arabia, increasing restrictions on civil society have not been met with a clear response from the EU, which rarely speaks out publicly in defence of the country’s human rights defenders. In contrast, despite complex relations with China, the EU uses much more public diplomacy to raise the cases of activists facing harassment, arbitrary detention and torture.

Weak EU responses to the mounting risks faced by human rights defenders included a lack of public statements in certain countries, or statements which failed to reflect the gravity of the situation facing activists. EU statements are often not translated into local languages or shared on social media.

EU inaction leaves human rights defenders to fend for themselves. When Mohammed al-Otaibi, a human rights defender from Saudi Arabia was forcibly deported from Qatar despite having been granted a humanitarian visa by Norway, EU member states failed to speak out on his defence and further exposed him to injustice.

EU support can have a positive impact on HRDs

Yet when the EU does act, it makes a difference. Consistent, high-level and coordinated EU and member state action contributed to decisions by authorities to reduce or even drop the charges against Russian human rights defenders Oyub Titiev and Valentina Cherevatenko,

On 30 August 2019, several women human rights defenders took their concerns to High Representative Mogherini and EU Foreign Ministers when they were invited to a recent meeting of Foreign Affairs Ministers in Helsinki.

“My organisation engages directly with the EU and we are grateful for its vital support, both financial and technical, for human rights defenders in the east and Horn of Africa sub region. But I have also seen that the EU is clearly in a double bind when business or other vital interests are concerned. It is important for the EU to continue its work, but it must be guided by the expertise of people defending rights.”

The report identifies several good and even innovative EU practices to support human rights defenders in these countries and beyond, yet these approaches do not appear to be systematised or shared across countries.

“When the EU and its member states stand for human rights defenders, it can be the difference between freedom or imprisonment, between life and death.

“Our research shows serious inconsistencies when it comes to the application of EU policies to protect human rights defenders. For instance, the EU often speaks out for defenders in China to try to make their plight heard. On the other hand, EU public interventions in Saudi Arabia are virtually non-existent amidst a serious crackdown on dissent – maintaining a close partnership with the Kingdom has evidently taken precedence over human rights concerns.

“These inconsistencies undermine the credibility and robustness of the EU’s HRD policy at the global level. At a time when women, LGBTI and Indigenous defenders, as well as those working on issues related to the land, territory and the environment are particularly at risk, it is more urgent than ever for the EU to act in support of those who dare to speak up for human rights.

“This is about journalists, lawyers, health professionals, teachers and activists defending the rights of all of us. But too often, the EU fails to meet its potential as a human rights champion by punching below its weight.

“The EU and its member states need a more strategic and visible approach to support and protect people at risk for defending human rights and their crucial work.

“A good start would be for EU Foreign Ministers to affirm their commitment to promote and protect HRDs through Foreign Affairs Council Conclusions.”

“Amnesty is calling on Boris Johnson to help protect human rights defenders around the world as a matter of absolute urgency.

“The level of danger facing activists has reached crisis point. Every day people are threatened, tortured, imprisoned and killed for what they fight for, believe in or simply for who they are.

“The Prime Minister’s vision of a ‘Global Britain’ must be inextricably linked to the protection of human rights defenders – and right now there has never been a better time to take action and set an example to the world.”