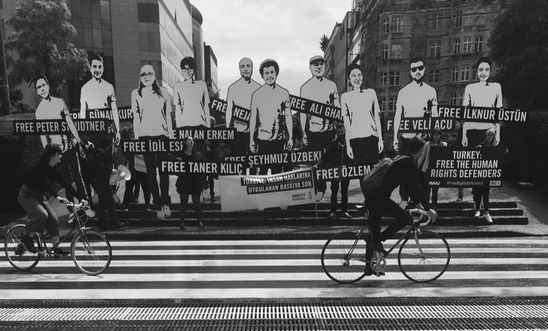 protest calling for immediate release of jailed activists - centre piece of which was 10 giant figures representing those jailed.

Mr Shetty met with Ms Mogherini in Brussels this morning and presented her with a petition calling on her to use her influence to help secure the immediate release of the 10 human rights defenders jailed earlier this month. He then joined scores of activists at a protest outside the European Commission building, the centre piece of which was 10 giant figures representing those jailed.

“This morning I met with Federica Mogherini and presented her with a petition of nearly 900,000 signatures collected in a matter of days calling on her to use her influence to help ensure the immediate and unconditional release of our Amnesty International colleagues and the other human rights defenders jailed in Turkey. We expect her to raise their cases with Ministers Çavuşoğlu and Çelik in the context of growing concerns about the deterioration of the respect for the rule of law and human rights in Turkey.

“Whilst world leaders are starting to speak out, this is not just an issue for politicians. Defending human rights is not a crime, but it is fast becoming one in Turkey and it is incumbent on everyone who believes in fundamental freedoms to make clear that the crossing of this red line cannot be tolerated. We only have a small window of opportunity to stop this now, before there’s no one left to stand up for what’s right.”

Protesters gathered on the Schuman roundabout opposite the European Commission building, including the partners of jailed activists, Ali Gharavi and Peter Steudtner.

“For me this is personal. My husband Ali and my dear friends Peter and Ozlem are in jail.

“He is a beautiful soul and we thank you for your support. We will not stop until they are released. Nobody is free until everybody is free.”

Amnesty International reaffirms its call for the UK to join the list of governments publicly calling for the immediate and unconditional release of the human rights defenders.