Ethiopia: humanitarian truce in Tigray a 'positive step' and must lead to aid access 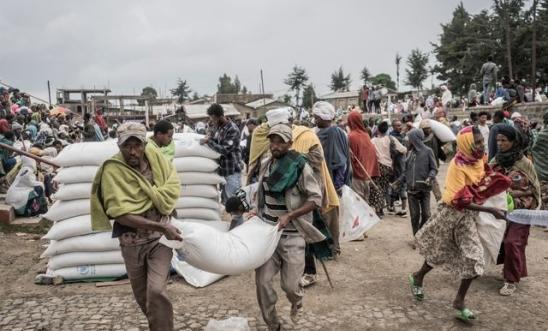 In response to the humanitarian truce announced by the Ethiopian Federal Government in the conflict-affected Tigray region - which Tigrayan authorities have said they will respect if sufficient aid reaches Tigray within a reasonable timeframe - Sarah Jackson, Amnesty International’s Deputy Director for East Africa, the Horn and the Great Lakes region, said:

“The humanitarian truce is a positive step for millions of people trapped in the conflict in Tigray region, where meagre humanitarian aid supplies have left people starving - with insufficient food, water and other essentials.

“Amnesty International urges all actors in the conflict to seize this opportunity to avoid worsening the humanitarian catastrophe that is unfolding in Tigray. Children and women are dangerously malnourished, and media reports suggest many are already dying of starvation.

“All parties to the conflict must immediately allow humanitarian aid workers uninterrupted access to all conflict-affected areas of northern Ethiopia, including Afar and Amhara regions. This includes opening the flow of aid through the Afar-Tigray land route, which has been closed following the renewed fighting in the border area, and resumption of critical services such as banking, power, and mobile and internet communication.

“The truce also needs to include unfettered and non-discriminatory humanitarian aid, including medical care, to Western Tigray, which is currently under the control of Amhara and Eritrean forces.”

Reports indicate that more than 5.2 million people need food aid in Tigray, but humanitarians have only been able to reach 784,000 people since May 2021. The Ethiopian government’s shutdown of phone and internet communication, and of banking services, as well as restrictions on cash delivery to Tigray and fuel shortages have crippled humanitarian operations.