Eric Cantona: Brazil has priced out real fans and Qatar should never have got the World Cup 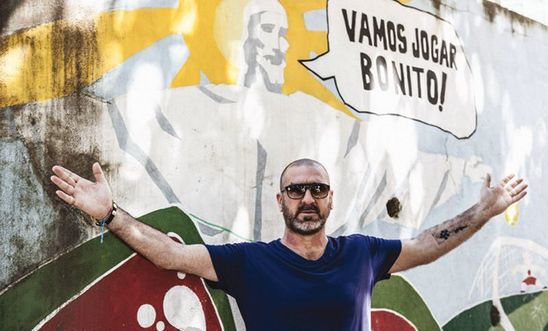 Former Manchester United footballer Eric Cantona has spoken exclusively to Amnesty on the failures of the Brazilian government, corruption in FIFA and the extreme poverty that is pricing fans out of the World Cup.

Cantona spoke ahead of the UK premiere of his new hour-long documentary ‘Looking for Rio’  which explores the complex relationship Rio has with football where government spending on the World Cup has forced Brazilians on the streets in protest. It will showcase at Amnesty’s first ever football film festival, Sidelines, in London on Saturday 7 June followed by an ‘in conversation’ with Eric Cantona and his brothers Joel and Jean-Marie, who together form the ‘Canto Bros’ production company behind the film.

In response to the mass protests in Rio, the pricing out of Brazil’s poorest and the costly price of World Cup tickets, Cantona said:

“The people don’t understand how it costs so much, and they are angry because they know that a lot of money have been taken through corruption and the costs also. Why is not spent the money for education, hospitals?

“They cannot go anymore to the stadium because it is too expensive. So they don’t educate them, they just throw them away and bring people who can pay the tickets.”

Cantona also went on to question FIFA’s decision to award the 2022 World Cup to Qatar – a country which brazenly violates human rights in the widespread abuse of its migrant workers. Again, accusing FIFA of prioritising money over fans, he said:

Amnesty’s first ever football film festival runs from Friday 6 - Sunday 8 June at Hackney Picturehouse and will be a celebration of thought-provoking films, lively Q&A's and panel discussions, aimed at bringing the two worlds of football and human rights together.

The festival is a partnership between Amnesty International UK, Picturehouse Cinemas and football quarterly The Blizzard.

Other documentaries to be shown at the festival document the ups and downs of the Egyptian national side during the Arab Spring, the non-Jewish Ajax fans in the Netherlands who call themselves Jews, Spanish Civil War refugees who became the first Spaniards to play professional football in England and the Argentinian women players fighting for recognition by their families, friends, clubs and the country’s Football Association.

Panel debates over the weekend will look at racism and homophobia in football, the responsibility major sports bodies have to challenge human rights abuses in host countries and women in football.

For the full programme visit: https://www.amnesty.org.uk/issues/Sidelines%3A-Football-film-festival