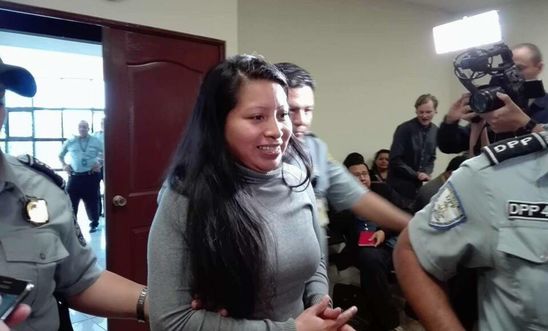 Teodora Vázquez at an earlier hearing in El Salvador

Teodora del Carmen Vásquez, who was jailed following pregnancy-related complications resulting in stillbirth, has been freed today after a decade behind bars.

With at least 27 women still imprisoned under El Salvador’s total ban on abortion, Amnesty International has today called for an end to the country’s extreme anti-abortion laws.

“It’s encouraging to see Teodora stepping out of jail, where she should have never been in the first place. But El Salvador is still far from fully ensuring the rights of women and girls in the country.

“Authorities in El Salvador must urgently repeal this outrageous abortion ban which has created a pervasive context of discrimination, pain and injustice.”

In El Salvador, women who suffer pregnancy-related complications resulting in miscarriages and stillbirths are routinely suspected of having had an abortion, which is banned in all circumstances. Prosecutors often charge them with ‘homicide’ or ‘aggravated homicide’, which carries a penalty of up 50 years in prison.

Sentenced to 30 years for ‘aggravated homicide’

Teodora suffered a stillbirth in 2007, after experiencing severe pain and bleeding at work. That day, police arrested her as she lay in a pool of blood. She was later sentenced to 30 years for ‘aggravated homicide’ in a trial marred by irregularities.

El Salvador’s Ministry of Justice eventually commuted Teodora’s sentence, but did not overturn the conviction or recognise her innocence. Her lawyers now intend to clear her name and seek compensation and redress for the 10 years that she spent behind bars.

At least 27 other women are still incarcerated under El Salvador’s draconian abortion law. Those punished are often from impoverished backgrounds, with little access to education, health care or justice.