El Salvador: Acquittal of Evelyn Hernández is a victory for human rights 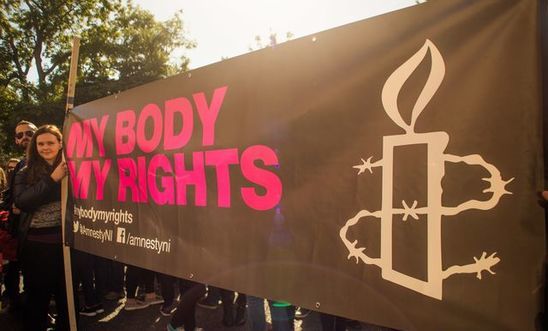 My Body My Rights campaign

An appeals court in El Salvador today acquitted Evelyn Hernández of charges of aggravated homicide. Hernández had been convicted in 2017 under El Salvador’s strict anti-abortion laws after she suffered an obstetric emergency in 2016 which resulted in the loss of her pregnancy.

“This is a resounding victory for the rights of women in El Salvador. It reaffirms that no woman should be wrongly accused of homicide for the simple fact of suffering an obstetric emergency.

Now that Evelyn has been acquitted, Amnesty International calls on El Salvador to end the shameful and discriminatory practice of criminalizing women once and for all by immediately revoking the nation’s draconian anti-abortion laws.”

On 6 April 2016, Evelyn Hernández, 21, suffered an obstetric emergency in her home in El Salvador which resulted in the loss of her pregnancy. Once at hospital, attending staff reported her to the police. She was arrested, tried, and sentenced to 30 years in jail for aggravated homicide. In 2018, a higher court overturned this ruling and ordered a re-trial.

Abortion is illegal under all circumstances in El Salvador, and women who suffer obstetric emergencies are often wrongly convicted under these laws.

According to Amnesty International’s partner organizations in the country, at least 19 women remain in jail or continue to face charges in these circumstances.

In 2015, Amnesty International published a report that highlighted the impact of such arbitrary punishments on women in El Salvador and how those impacted come predominantly from marginalized backgrounds.