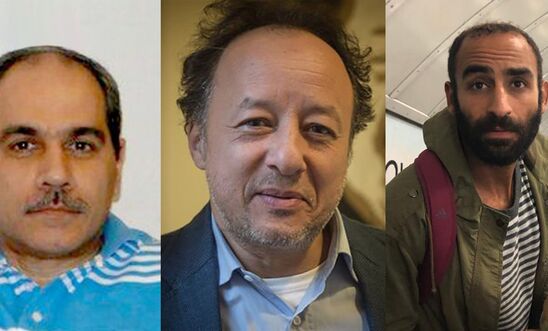 First case of reprisal against activists for engaging with Western diplomats

Gasser Abdel-Razek, the recently-detained Executive Director of the Egyptian Initiative for Personal Rights, has been subjected to cruel and inhuman treatment in prison, said Amnesty International.

Amnesty fears that the veteran human rights defender and father-of-two is being deliberately held in poor conditions to punish him for his human rights work.

Since his transfer to Liman Tora Prison on 20 November, Abdel-Razek has been held in solitary confinement in a cold cell and denied warm clothing or a mattress. All his personal belongings and money have been confiscated. The prison authorities have denied him any time outside his cell, including for exercise, and also prevented him from purchasing basic necessities from the prison canteen. The prison authorities have also shaved his head completely, an unusual step for pre-trial detainees, raising further concerns over discriminatory and punitive treatment.

Abdel-Razek and his colleagues Karim Ennarah (EIPR’s Criminal Justice Unit Director) and Mohamed Basheer (Administrative Director) are detained pending investigations into bogus “terrorism”-related charges, solely as a result of the organisation’s human rights work. They were arbitrarily arrested last week in retaliation for a meeting with Western diplomats - including from the UK, Canada and Germany - on 3 November. A fourth EIPR staff member, Patrick George Zaki, has been in prison since his arrest in February after his return from Italy where he had been studying.

Amnesty has launched a new campaign calling on the Egyptian authorities to release the detained EIPR staff.

Yesterday, Egypt’s judicial authorities also added the human rights defender Mohamed al-Baqer - and founder of the Adalah Center for Rights and Freedoms - to a “terrorists list” for five years, along with prominent blogger and activist Alaa Abdelfatah and other opposition politicians, without charging them with a criminal offence, nor giving them an opportunity to challenge the evidence.

Egypt has a history of reprisals against civil society for engaging with UN officials - though Amnesty believes this is the first such case following an engagement with diplomats, representing therefore an apparent escalation in the authorities’ crackdown. The authorities regularly use unfounded “terrorism”-related charges to imprison human rights defenders and subject them to punitive measures without trial. Human rights defenders Mohamed al-Baqer, Esraa Abdelfatah, Mahienour al-Masry and Solafa Magdy are all detained pending investigation in the same case (known as Case 173)

“The arrest of EIPR staff, following a meeting with diplomats, Gasser Abdel-Razek’s punitive treatment in detention and the designation of human rights defenders as ‘terrorists’, are the latest illustrations of how deep and catastrophic the crisis of human rights in Egypt has become.

“Egyptian authorities regularly use unfounded ‘terrorism’ charges to detain and defame human rights defenders in the eyes of the Egyptian public and international community.

“The international community must show to Egypt that they utterly reject the equation of defending human rights with terrorism and continue to demand the immediate and unconditional release of all detained human rights defenders in Egypt.”

Amnesty is calling on countries whose representatives attended the 3 November diplomats meeting - including the UK, Canada and Germany - to publicly demand that Egypt release the activists and end its brutal repression of the human rights community. The UK Foreign Secretary Dominic Raab reportedly raised the EIPR arrests in a telephone call with his counterpart Sameh Shoukry last week, and the FCDO has since issued a statement of concern.

Use of counter-terror legislation

Amnesty has documented the Egyptian authorities’ routine and systematic use of counter-terror legislation to prosecute thousands of peaceful critics and suspend guarantees to fair trial. Multiple UN experts have expressed concern about how Egypt’s terrorism laws facilitate rights abuses, and how imprisoned human rights defenders in Egypt are at grave risk of COVID-19.