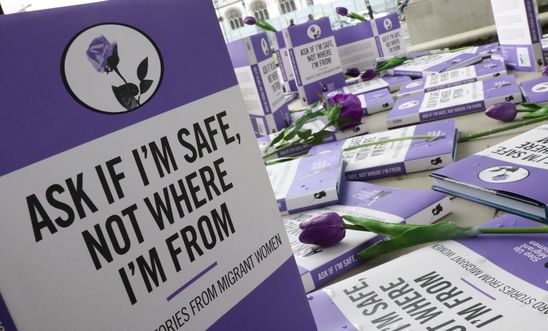 In the letter, the MPs say that migrant women “find it virtually impossible to access protection from the police or doctors for fear they will be reported to the Home Office and detained or even deported” and “are falling through the gaps and further harmed by our current system that treats them as suspects rather than victims”. They urge the Home Secretary and the Government to “address the specific needs of migrant women” in the forthcoming Domestic Abuse Bill.

The letter comes alongside the publication of the Joint Parliamentary Committee’s report on the draft Bill today (14 June), which recommends the Government takes steps to ensure all survivors are protected without discrimination, including access to refuge and welfare and the creation of a firewall between support services and immigration control.

Amnesty International UK - which is campaigning alongside the Step Up Migrant Women coalition for better protections for migrant and BME women victims and survivors of domestic abuse – has welcomed the “timely” intervention.

“This is a timely and much needed intervention from a diverse and cross-party group of MPs, many of whom will have supported migrant women in their constituencies who are unable to access protection from abuse because of a system which discriminates against them.

“That system must change, and the government now has an opportunity to act. They must listen to migrant women themselves, to the MPs who signed this letter, and to the Domestic Abuse Bill Committee, who have also been clear.

“The Bill must provide equal protection for all survivors, no matter who they are or where they are from.”

Domestic abuse affects 2 million people - mostly women - every year. As MPs, we’ve all met constituents who’ve experienced this violence. We’ve heard their devastating stories, we’ve listened to their needs, and we’ve vowed to ensure their voices are heard in parliament.

That’s why we’re compelled to raise our concerns about the draft Domestic Abuse Bill, which, as it currently stands, will fail to protect migrant women from this terrible violence.

We know from meeting people in our surgeries that some of the most vulnerable women experiencing or trying to escape domestic abuse are migrant women.

These women find it virtually impossible to access protection from the police or doctors for fear they will be reported to the Home Office and detained or even deported. These women are unable to find safety in a refuge bed because they have no recourse to public funds. These women are often blocked from securing their immigration status because of a dependence on their abusive partner.

These are the women who are falling through the gaps and further harmed by our current system that treats them as suspects rather than victims. They face a hopeless choice: homelessness, destitution, detention or deportation on the one hand, or returning home to a violent or abusive partner on the other.

The Domestic Abuse Bill is a once-in-a-generation opportunity for our government to ensure all women are offered proper protection, and it’s the vehicle through which the Government hopes to ratify the Istanbul Convention on preventing violence against women.

But it will fail in these goals if neglects to address the specific needs of migrant women.

We support calls from across the BME, women’s and human rights sectors for the Bill to guarantee adequate and equal protection for all survivors of domestic abuse. The Government must take this opportunity to listen to migrant women survivors and ensure the Bill leaves no woman behind.