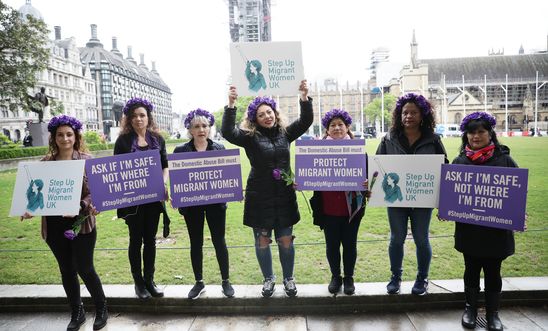 In a report published today (14 June), MPs and Lords support better for protection for women reporting domestic abuse, including the creation of a firewall between support services and immigration control.

Members of the Step Up Migrant Women (SUMW) campaign - a coalition of more than 30 organisations – welcome recommendations by the Joint Committee of MPs and Lords examining the draft Domestic Abuse Bill, which echo their call for migrant women reporting domestic abuse to be protected and supported as victims, before any consideration of immigration status.

Calling the draft Domestic Abuse Bill a ‘missed opportunity’ to address the needs of migrant women, the Committee also urged that a new statutory definition should recognise a broader range of abusive behaviour, including perpetrators using insecure immigration status as a form of coercive control.

Acknowledging that migrant women experiencing domestic abuse had been effectively excluded from the draft Bill, and that this was not compliant with domestic and international human rights laws, the Committee also recommends strengthening protections against discrimination through a duty on public authorities to protect the rights of all victims of domestic abuse. They recommend this duty should mirror the language of the Istanbul Convention – the ‘gold standard’ treaty for combatting violence against women and girls.

SUMW campaigners welcomed the acknowledgement that migrant women with no recourse to public funds are effectively barred from accessing refuges and other support services. However, campaigners warned that the Government must do more to safeguard migrant women and calls for the Bill to remove no recourse to public funds restrictions for all survivors of domestic abuse.

“At LAWRS we are very concerned about the growing number of women who choose not to report because of the lack of protection and anti-migrant attitudes. It is shameful that women facing abuse also fear the agencies that are there to support people at risk.

"For the past two years, the #StepUpMigrantWomen coalition has urged Government to listen to the survivors and to the expert specialist and human rights organisations. We now urge them to listen to their own peers and to take responsible steps and follow the Committee's recommendations to protect migrant women. We need a firewall, we need safe reporting, we need specialist support for women exiting violence, but with a dead-end road women won't be able to come forward. A 'NRPF label' should not trap women in abuse."

"At Women for Refugee Women we see how asylum-seeking women struggle to find protection from domestic violence and abuse. We see time and again the barriers that women with no recourse to public funds face in accessing services and reporting crime. I was glad to be able to give evidence to the committee and remind them that protection must be needs based, not status based.

"We therefore welcome the statement from the committee that the bill is ‘currently a missed opportunity to address the needs of migrant women who have no recourse to public funds' and that the committee recognises the need for 'action to help this most vulnerable group of individuals'. We hope that action will indeed follow and that this will now be addressed by the government. Women's lives are at stake."

“The Committee are absolutely right to highlight that the Government’s landmark Domestic Abuse Bill has neglected the situation and urgent needs of migrant women and children who do not have secure immigration status.

"Currently women’s support services really struggle to provide beds and other help for these women and their children because they are not entitled to housing and welfare support. We also know that women in this situation are facing widespread discrimination, and appallingly, often treated as immigration offenders before victims of abuse.

"This shames us as a society – when we put immigration enforcement before the lives of women and children. The Government must now take this opportunity to show it is listening and bring forward legislation that will protect ALL victims of domestic abuse equally.”

“We welcome the Committee’s robust recommendations today, which would embed vital protections for migrant women in the Domestic Abuse Bill. Legislating for a ‘firewall’ between trusted public services and immigration enforcement is vital to ensure that all survivors and people with insecure immigration status can report crimes without fear.

“We urge the Government to implement these recommendations and go further still – by ensuring migrant women with no recourse to public funds can access safe accommodation, security and support. Without these comprehensive protections for migrant women, this Bill will be a missed opportunity that prioritises immigration control over public safety.”

“The Committee has clearly listened to migrant survivors of domestic abuse and is rightly urging the Government to offer proper and equal protections in the Domestic Abuse Bill.

"The Government now has an opportunity to make this Bill the landmark piece of legislation it should be, through enshrining protection without discrimination, ensuring safe reporting, and by providing life-saving access to refuge and public funds for all survivors, wherever they are from.”

“Sisters For Change welcomes the Joint Committee’s recommendation of an additional clause in the Bill imposing a non-discrimination duty on public authorities when dealing with victims of domestic abuse that reflects Article 4(3) of the Istanbul Convention.

The UK Government has existing international legal obligations under the UN Convention on the Elimination of Discrimination Against Women to combat violence against women without discrimination and to provide protection and support to all women, including refugee women, women seeking asylum, migrant women and stateless women.”

Step Up Migrant Women (SUMW) - a coalition of more than 30 organisations, including the Latin American Women’s Rights Service (LAWRS), Southall Black Sisters, Amnesty International UK, Sisters For Change, IMKAAN, Liberty and End Violence Against Women Coalition - is urging the government to ensure equal protection for migrant, refugee and BAME women survivors of domestic abuse who often slip through the gaps because of their particular experiences of violence.

· offer a system of full confidentiality, protection and support for all migrant women who report their abuse, regardless of their immigration status. This policy must apply to all statutory services, including the police and GPs;

· make specialist organisations led by and for migrant and black and minority ethnic women – which have had their services decimated by funding cuts – a central part of tackling domestic abuse and violence;

· recognise the gender inequality underlying domestic abuse and the disproportionate impact on women and girls;

· ensure all migrant women at risk of experiencing abuse have access to public funds and routes to regularise their immigration status independent of their perpetrator.