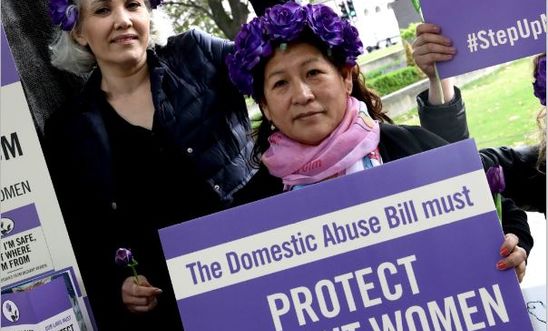 Migrant women survivors of domestic abuse and frontline service providers have come to Westminster today to raise concerns that the Government’s forthcoming Domestic Abuse Bill will fail to protect migrant and BME women from violence.

The warning comes ahead of Parliament’s first formal scrutiny of the draft Bill – due to be published by the Joint Committee on the Draft Domestic Abuse Bill tomorrow (14 June).

Migrant women survivors and frontline staff from Step Up Migrant Women  – a coalition of more than 40 organisations working to secure meaningful protections for migrant, refugee and BME survivors of domestic abuse –  laid an installation of purple books and purple flowers on Parliament Square to represent their unheard stories of violence and to demand the Government takes note.

“The current draft of the Domestic Abuse Bill ignores the stories of migrant survivors of domestic abuse.

“Migrant women are blocked from reporting violence to the police or GPs for fear they will be treated as suspects and face detention or deportation.

“The absolute priority should be making sure these women are safe – protected from abusers and able to escape violence by accessing life-saving refuge accommodation.

“Migrant women deserve to be heard and deserve safety. The Prime Minister must listen and revise the Bill to ensure it offers meaningful protection to all women, no matter where they come from.”

Migrant women are often too fearful to report violence to the police, GPs, or other public service providers due to the real risk they will be detained or deported as a result.

Recent research has found that almost 2 in 3 migrant women fear reporting violence to the police.

Isabela, a survivor of domestic abuse, shares her experience of how lack of protections for migrant women left her in a desperate situation:

“I was convinced by my British ex-husband that I had a spousal visa, but he had refused to apply for one as soon as I arrived to the UK. I continued to undergo domestic violence from my then husband who threatened me repeatedly with deportation. He and his mother hid my passport away from me and he told me I would never be believed and that he would take our children away from me. I was refused support from the police and was made homeless and destitute. I was also told I had no custody over my child because I was undocumented.”

Step Up Migrant Women (SUMW) is a coalition led by the Latin American Women’s Rights Service (LAWRS) of more than 40 organisations, including Amnesty International UK, Liberty, Sisters For Change, Imkaan and the End Violence Against Women Coalition. SUMW is campaigning to ensure meaningful protections for migrant, refugee and BME women survivors of domestic abuse who often slip through the gaps because of their particular experiences of violence. The current draft Domestic Abuse Bill will leave thousands of survivors without vital protections because of their race, ethnicity, nationality and/or immigration status. SUMW is urging the Government to end this discriminatory system and uphold fundamental human rights, by legislating for crucial safeguards in the Domestic Abuse Bill. More details on how the Bill fails migrant and BME survivors, and SUMW’s asks can be found here.